Thanks to the gorgeous Em Petrova for a Hades Hot excerpt from her new release, Hard Ridin' to start off out Hot Hump Day Excerpts.


Tossing away his tenuous grip he had on his need to show her how important she was to him, he trailed his tongue over her neck and down to her collarbone. It was too chilly out to strip off her shirts and worship her breasts with his mouth, but he would damn well keep her warm.
She dropped her sandwich as he bore her back on the woolen blanket. The scent of crushed grass hovered around them, mixing with her soap-and-water perfume and the cold cuts from the discarded sandwich.Holden released her neck and gazed down into her eyes. “I don’t want to only have sex with you.” His voice came out roughly, as if he’d gargled with a belt buckle, a horse bit and a swallow of whiskey.
Something moved behind her eyes that he didn’t know how to read. Then the warmth was back, her chocolate eyes melting as she stared at him. Running her tongue along her lower lip, she surged upward for his kiss. “I know,” she said a split second before their mouths met.
He angled his mouth over hers and drove his tongue deep, tasting her desire. A ripe peach. That’s what she was. All curves and softness and sweetness. Dipping into her mouth was like lapping at whipped cream drizzled with chocolate—a decadent sugar high.
He trapped her with his hips and ground his erection into her pussy. With a groan, he dropped his forehead to hers. “Fuck, I can feel your heat through your jeans.”
“It’s hotter inside the jeans.”
“Have mercy.” All his worries about their rocky reunion and the strange tangle with Jens vanished, and suddenly he was alone on this ridge with the love of his life.
“Never.” She ran her palm down his abs and captured his rigid cock. Through his jeans, she stroked him. Each pass of her fingers over his bulbous head made him grind his teeth. Pleasure licked at his insides.He inched his fingers beneath the layers of her shirts and met with searing skin. Words sprang onto his tongue. The things he’d thought about while in Alaska—how he adored her musical laugh and the way she nibbled at the tines of her fork after she took a bite. Now he loved her for even more reasons, such as the fact that she dressed like a country girl and fit into the ranch as a man’s hand fit a work glove.
“I can’t get enough of you. You smell so damn good.” He nuzzled her breasts through her shirts as he circled her navel with a thumb. His cock hardened another fraction when she brought her hips upward against his.
Raking her nails down his spine, she wrapped her thighs around his hips. “Take me, Holden. Right here. Now.”
The need to drive into her tight sheath was more than he could bear. In seconds, he had her jeans and panties shimmied down her hips, her shirts off and her bra unhooked. She nudged his pants down too and eased his thick cock onto her palm.
Staring into his eyes, she stroked him. Juices oozed from the tip, and she smeared her fingertip through it. The sun was warm on his back but a cool breeze teased at their exposed parts. He covered her more fully with his body to keep her warm.
“Come into me, Holden.”
For a frantic minute, he warred between giving her what she wanted and giving her what he thought she needed. Right now, she wanted his body, but later, she may think back on this encounter and wish they’d continued with their sweet picnic.
She rocked her hips, and her wet pussy lips engulfed his swollen cock head. A full-body shudder passed from her and into him.
“Oh, hell!” With one hard thrust, he sank deep into her pussy even as he pinched her nipple.
Crying out, she squeezed her eyes shut, and bliss painted her features into a masterpiece. Behind her, the colors of the landscape contrasted with her dark hair and eyes. The creamy hue of her skin turned to gold beneath the midday sun.
He withdrew almost to the tip and then slammed back into her deeper than before. His balls were bulging and his heart throbbing. When her walls suddenly tightened around him, he slid home again and again until she tipped over the edge.
Feeling her splinter around him, her pussy contracting madly, sent him out of control. A primal cry burst from him as white-hot jets of come soaked her.
At that moment, they sucked in matching gasps. Her gaze met his, frantic with a what have we done?

Now for the blurb so you can read more of the scorching menage.

One man by day, the other by night. With cowboys this hot, who needs sleep? 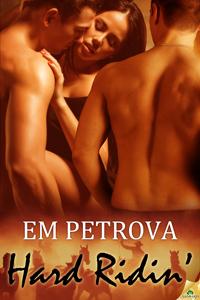 Eight months after her lover, Holden, went off to join the Alaskan fishing fleet, Laurel gave up on him and soothed her broken heart by focusing on her dream of owning a small organic farm. Now her crop is growing—and so are her feelings for Jens, the hunky rancher who owns the land she’s tending.

Behind her affection for Jens, though she hides a secret: she still aches for Holden. If Jens knew she once loved his best friend, she fears he’ll walk out on her, too.

When Holden returns to find his girl in Jens’s arms, he’s nearly crippled with jealous rage. And with fear that she’ll run away from them both unless they figure out a solution—fast. It’s Jens who comes up with the crazy-hot idea to share her.

As their three-way dance of seduction heats up, the sexual and emotional barriers fall like dominos. But now it’s Jens who’s holding onto a secret. One that could not only destroy their tenuous bond, but leave them all without a home.
Buy from All Romance Ebooks