Thanks to Heather for our Hot Hump Day excerpt today!

Steven looked on with curiosity.  “What are you…?”
With two long strides Erik was by his side, his lips closed over Steve’s, momentarily silencing any further words.
Erik probed Steve’s lips with his warm tongue.  Lust kindled earlier exploded into an inferno of complete hunger, which threatened to consume his impulse to resist.
Lightly touching Steve’s face, Erik gazed at him.  “I have wanted to do that all night.”
Steve’s will reasserted itself once more. He backed away a step.  Feeling very confused, he tried to articulate the war that raged within his heart.  “I can’t.  You’re …It isn’t…”
Like a sensual panther, Erik stalked toward Steve’s retreating form, backing him against a wall.  Growling with an animalistic lust, “I want you.”  Erik’s mouth descended on Steve’s neck, licking and nipping, causing a pure desire, which had him moaning once again.
Surrendering, Steve’s arms wrapped around Erik pulling him closer of their own accord. 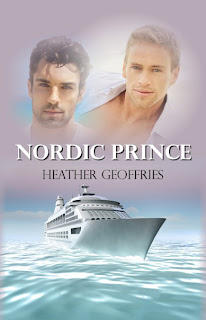 ~~~~~~~~~~~~~~~~~~~~~~~~
When Doctor Steven Mills is dragged onto The Nordic Prince for fun in the sun by his sister, Amanda, he is certain he will be miserable. Until he meets Erik.
Erik is fun, exciting and just what the doctor ordered. Some drinks and dancing with him are more enticing to Steven than any date he’s gone on with women. Before long, the two escape the busy dance floor for the quiet—and private—spa where Eric works on Steven’s body with very skilled hands. Steven is overcome with an onslaught of new emotions and sensations and has the best sexual experience of his life.
Now Steven must wrestle with new feelings and desires and make a decision that could change his life forever.

Purchase Nordic Prince from Amazon and ARe. You can find out more about Heather on Facebook and her website.
at 08:00