Thumbs Up Thursday - Immortal Ever After by Lynsay Sands

I first discovered Lynsay Sands when I was looking for an audio book to listen to.  I tried her Scottish Medieval stories first and loved them. Then I tried her Regency novels.  I was a bit wary of trying out her Argeneau vampire series as I had never been much into paranormal. But with all the fuss around Twilight, Buffy, Vampire Diaries etc, I felt I was missing out. So I thought I would try out her first Novel (A Quick Bite). And that's when I fell head over heels in love with the Argeneau family and their friends.

In some ways this is a review of the entire series. Immortal Ever After is book 20 in the series (there are also two stories which are parts of anthologies). The Argeneau/ Rogue Hunter series is an almost science fiction take of the vampire trope. The vast majority of vampires are kind, normal individuals who just have to avoid sunlight and have to drink bagged blood. Having escaped the fall of Atlantis, thanks to nano technology which repair all their injuries, the Immortals, as they prefer to be called, live among the rest of humanity.  With modern laws in place which ban immortals from drinking "off the hoof" they live a relatively normal existence.

Unfortunately there are rogues who want to return to the old ways or who are so fed up of living that they choose to break laws so that they will be killed by the enforcers.

When Valerie Moyer is kidnapped by a fanged man who seems to think he's a vampire and is held in a basement cage along with 6 other women, she decides it's time to fight back. Once she has phoned the police, she collapses, waking up later in the house of Lucian Argeneau and his very pregnant wife. She is introduced to Anders who is immediately captivated by her.  As she begins to put together what is happening around her, she finds herself falling for sexy Anders and coming to terms with the fact that he, Lucian and Leigh (Lucian's wife) are all vampires.

Needless to say that after a bit of drama - I don't want to spoil it- they decide they are in love.

I have always liked the character of Anders and couldn't wait for him to have his own story.  Despite being terrified and completely knocked off her stride, Valerie is a gutsy heroine who doesn't just accept things as they are presented to her. Many of the earlier characters make an appearance and I love that Lucian and Leigh had a big part in the story. (I just wish I could see Lucian as looking like anything other than ucius Malfoy in Harry Potter.)

The entire series is inspired in my humble opinion and I can't wait until September when number 21 comes out. 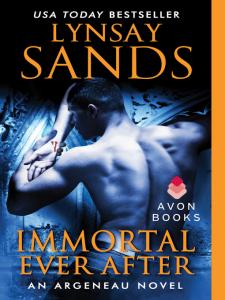 Blurb:
New York Times bestselling author Lynsay Sands enthralls with Immortal Ever After, the latest entry in her sizzling paranormal vampire series featuring the wickedly alluring Argeneau family.
When Valerie is saved by the Argenau rescue team after being kidnapped by an immortal madman, Anders finds himself captivated by the strong, sultry woman. Engaged in a steamy affair, he promises to do everything in his power to protect Valerie while her abductor is still at large—and on the hunt. Sexy, fun, and full of passion, Lynsay Sands’s Immortal Ever After delivers a tantalizing adventure and a smoldering romance.
Buy at All Romance ebooks now
at 08:00