Thanks to Barbara for this smokin' excerpt from Contract for Marriage and great giveaway. Enjoy!

It’s been so lovely being on Love, Lust and Lipstick stains today. I have a $10 Amazon gift card to gift a commenter who can tell me an interesting fact about New Zealand – the setting for Contract for Marriage
~~~~~~~~~~~~~~~
Christo has just tracked Ruby down to the summerhouse, the place where they first made love ten years ago.
He pushed off the frame and for a moment, the only sound was the chorus of cicadas calling in the dark outside. Without Christo moving a muscle, she could feel his presence dominating the room, the power of his gaze searching every part of her body. If she could leave now they’d be married tomorrow and both have what they wanted. But the pull of him was growing ever stronger.
“It wasn’t all bad, was it, Ruby? You and me.” He took a step toward her, his black eyes shining in the dim light of the lamp.
She drew in a quick breath to steady the nerves dancing in her stomach. “Some of it was very memorable,” she managed.
He was within touching distance and she couldn’t drag her gaze from the breadth of his chest beneath the cotton robe.
“Was it this that was memorable?” He grazed a finger down her cheek and she swallowed. “Or maybe this.” He stepped forward, bent down and brushed his lips across hers.
Slowly she shook her head, despite her body aching for him to touch her again.
“Perhaps this.” He ran his hand down her neck and stopped where her breast swelled beneath the towel. Every thought in Ruby’s head scrambled. Why was it that she had to stay out of Christo’s bed? What would happen if she succumbed to the seismic pull his body had for her right now?
Her mind wouldn’t provide her with an answer.
“Ruby—” He breathed her name then pressed his warm lips once more against hers, cupping the base of her neck in his broad palm. Running his tongue along her bottom lip, he pulled her closer, his hand slipping to her shoulders and her body caught alight.
“Christo.” As his mouth moved to graze her throat, her pulse spiked and the promise she’d made earlier demanded to be heard. “We agreed we wouldn’t do this.”
She felt his mouth form a smile against her skin. “You said you wouldn’t make love when we were married,” he murmured, his lips moving to her earlobe. “We’re not.”
He pulled back for an instant and eyes, sinful as black molasses, searched hers.
“This doesn’t change that,” she whispered while one of his fingers trailed fire along the skin above her towel.
“It doesn’t.” Did his tone rise or fall? Was it a question or a statement?
When his lips covered hers again she didn’t care. When she succumbed to the promise of his kiss, her senses were invaded in one overwhelming minute by the taste, the smell, the feel of his strong, tight body under her searching fingers. She was melting. As her hand slipped under his cotton robe to find the solid wall of his chest, it was as if his essence had been so burned into her all those years ago that her deepest memory had never forgotten.
But she wanted more of him, the whole of him. She wanted the overwhelming thrill of being wrapped in Christo’s arms. Her mind emptied and the only thing filling her body was the power of him and the burning to draw him deep into her body.
The sash windows in the small room were open, curtains puffing in as the hot, moist air rolled in from the night. His breathing, rasping and warm, made her breath hitch. Her mind raced forward, to being under him, part of him.
He took both her hands so they were face to face. Slowly he inched her back across the floor to the wall, his mouth getting closer to hers every step as he dipped his face lower. Her feet light on the polished floor, she felt like she was floating, weightless.
Desperate to taste him again, she arched her neck but he stayed tantalizingly distant, teasing. Each of his fingers laced through one of hers, the edge of his mouth curved down as if his life depended on these next few moments.
With one last step backward, he pressed her into the wall and she waited for his lips to claim her. Mouth heavy with need, she swallowed in anticipation.
But his face stayed inches away and slowly he lifted both arms above her head and pinned her, palm to palm. Bodies painfully distant, only the towel and his robe separated their skin. And then he looked deep in her eyes and that look, that bone-melting look sent a whisper direct to her soul. I want you now.
~~~~~~~~~~~~~~~~~~~~~~~~~~ 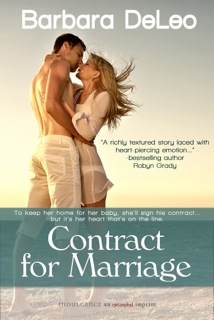 Property tycoon Christo Mantazis wants the one thing his riches can't buy--the villa where his mother has lived and worked as housekeeper for forty years. That it's the same house he was banished from after being caught making love to the owner's irresistible daughter stirs up old memories, and now he wants her more than ever.


Magazine editor Ruby Fleming's not about to give up her home to Christo, the man who broke her heart--until she discovers her mother left half of the estate to him, and she realizes she's trapped. When Christo offers a marriage of convenience, Ruby knows it's the only way for them to get what they want. Ruby needs a link to her past, and Christo needs his mother to retain her home.

But it's another need--to have Christo again--that Ruby must resist at all costs.
Purchase Contract for Marriage on Amazon, Barnes and Noble and iTunes