Thanks to Christina for donating this hotttt excerpt to keep us all inspired through the week!


“Roman.” The word was scarcely above a whisper, and wrapped around his reeling senses like a seductive embrace of purest silk. Her right hand slid from his neck, over his shoulder and along his arm. It was a light caress and yet as arousing as if she slid her naked body along him instead.
Gods. What was he thinking? Marcellus had warned him not to have her tonight. She was injured. She was under the influence of opium.
She was his slave.
Still, he couldn’t move. He remained kneeling on the floor beside her as her hand curled around his wrist. The light was oddly dimmed and yet he could see her delicate features and the fragile outline of her enticing body. And still he could not find the strength of will to stand up and leave.
“Are you man enough for me, Roman?” Her words were heated, provocative. A blatant challenge. “I’ve never had a barbarian before.” She smiled, as if that thought gave her great amusement and he battled against the renewed lust that thundered through his blood at her taunts.
“You will lie here and rest.” It was an order. Any other woman—any other man—would have instantly quailed. But this Celt, this slave—who did not even know she was a slave—merely offered him another sultry smile and pulled on his hand.
He didn’t resist.
She dragged his hand between her thighs and pressed him against her slick core. Air hissed between his clenched teeth as her feminine dampness caressed his fingers, as she rolled her hips and a breathy sigh escaped her lips.
“Don’t you want me, Roman?” She increased pressure on his hand and of their own volition his fingers pushed against her soft gown, seeking and finding the wet opening of her welcoming pussy.
Primal need thudded through his veins, tightened his rock-hard balls. This was madness. Feverishly his fingers bunched up her gown, exposing her thighs, until he gripped the material and wrenched it up to her waist.
Honey-blonde curls crowned her glistening lips, her flesh plump and pink and deliriously tantalizing. Mesmerized by the sheer eroticism of how she angled her hips toward him and by her evocative musky scent that caused his cock to thicken, he couldn’t remember why taking her was such a bad idea.
He trailed the tips of his fingers over her belly and then lower, teasing her soft curls. She sighed in evident pleasure and collapsed back onto the pallet as if she no longer possessed the strength to entice him. But he needed no additional enticement.
Everything he needed was here, between her spread thighs.
She was wet and hot. His finger slid along her cleft, her soft folds promising a wild, unforgettable ride. Breath rasped along his throat, need pounded through his groin, sanity sank beyond the fiery horizon.
She was willing. She was ready. And she was his.
~~~~~~~~~~~~~~~~~~~~~~~~~~~~~~~~~ 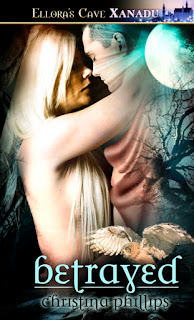 In 51 A.D., Druid priestess Nimue is injured and enslaved by the hated Roman Legions. Even though she is drawn to her captor, she’s determined to escape and complete her mission for the Briton king and her duty to Arianrhod, the goddess she is bound to.
The tough Roman warrior who captures her is far from the brutal barbarian she expects. His touch inflames her desires and passion burns between them. Though Nimue does not accept her enslavement, her heart surrenders to her enemy. When Arianrhod appears to her in the form of an owl, Nimue knows the union is blessed.
Roman warrior Tacitus is enchanted by the fiery beauty who shows no fear and challenges him at every turn. Though enslaving her goes against his heart, he’s determined to make her his. No woman has ever heated his blood as she does. But when he discovers her true nature as one who actually communes with the gods, his loyalties are torn between his heritage and a woman who could destroy everything he’s ever believed in.
A Romantica® fantasy erotic romance from Ellora’s Cave