Thanks to Elizabeth for this hot excerpt to perk us up midweek! Read on for some sizzling chemistry...

(Ben and Jayda have just had a fight, and she comes storming back to demand answers from him.)

Her palms made contact with his chest and surprised by her boldness, Jayda drove him three steps back. The contact with his warmth conjured a dizzy tornado in her brain. She couldn’t think…couldn’t stop herself, and it was all his sexy fault.

“Is this some of your crazy magic? Are you doing this to me?” Jayda pushed him back another step. Ben’s hands lightly encircled her forearms.

“Doing what, sweetheart?” He licked his lips.

“Making me want you!” She balled his T-shirt in her fist. Ben pulled her forward by her elbows. She sucked in a needy breath as his head dipped.

“You’re doing that all on your own.” He held her snugly, but not enough that she couldn’t back away if she wanted to. “I’m sorry about what I said. You probably think I’m a jerk.”

She bristled. “Damn right.” The words came out in a whispery mumble. Jayda looked at his mouth, her chest hitching. She smoothed the front of his shirt, his muscles hard and warm beneath the fabric. She closed her eyes for a fraction. She was in so much trouble. Ben’s palms ran up her arms to cup her shoulders. He pulled her closer, watching her. Their chests came together and she drew a quick breath at the contact. He trembled a little, as if suddenly racked by cold, his hands sliding to her back and holding her steady.

His lips brushed hers, quickly. Softly. “Then I’d better change your mind.”

Jayda’s muscles went soft and he tightened his hold to keep her steady. His mouth claimed hers with a crushing need. She moaned as surrender and fight tangled inside her. Ben’s hands slid up her back and into her hair. Hot kisses trailed over her cheek to her ear, where he nipped her earlobe lightly.

“I’ve wanted you since you tried to order me around at the truck fire.” His words were a deep purr. Forget hands; Ben’s voice caressed her in every throbbing place. Jayda’s fingers splayed over the contours of his chest. The more she touched him, the more she wanted to explore every inch of him.

She slid a hand around his neck and licked his collarbone. “God, Ben, me too.” One of his hands slipped back down her back and cupped her ass, pressing her hips against his. Jayda jerked at the contact, then settled into the wonderful press of his hand.

“Why did you come back?” Ben hitched her up a little and Jayda gasped as the hard length of his erection pressed into her belly. Her thighs quivered. If he kept talking, she was going to come to her senses. She didn’t want to come to anything except him. All of him.

“Because you’re making me crazy!” she cried, suddenly torn between stripping him down and getting the hell away from him. He was making her crazy! “Because I can’t think straight—”

“Sweetheart, in a minute you won’t be able to think at all.” Ben grabbed her ass with both hands and hiked her onto his waist. Her yelp of surprise died inside his mouth as his lips crushed hers. 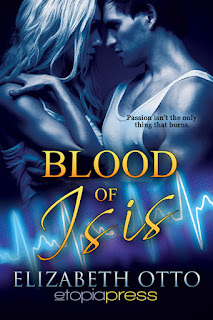 When a designer drug rocks the small town of New Brighton and makes junkies spontaneously combust, Paramedic Jayda Swenson suspects the super-methamphetamine her husband created before his death has resurfaced. She’s worked hard to create a safe, tidy life and put her meth-ravaged past behind her. Jayda has a secret to keep and her new life is the perfect cover. But when tourists start disappearing and charred body remains crop up, Jayda learns the hard way that this drug doesn’t just fry people’s minds—it also fuels demons.

Luckily, the sexy new medic, Ben Tierney, is a demon-hunter in disguise, except his demon-busting powers don’t work so well anymore. Until he realizes Jayda’s touch can refuel the energy he’s lost—a touch she’s not so willing to dish out. Now Jayda finds herself wedged between an ancient demon that knows her past and her secret, and Ben, who has plenty of secrets of his own. Fighting to hold onto her carefully controlled life, Jayda must decide if she’ll let Ben help her defeat the demons who threaten to infect the town by the 4th of July—even if it means exposing her true self and losing everything. Again.

Purchase Blood of Isis from Amazon, B&N and Kobo