Today's Hot Hump Day Excerpt is a bit of a teaser from Highland Haven by Krystal Brookes. It's the second book in the Kilrigh Heat Series but all books are standalone titles. Erin is watching Finlay play shinty (a rough sport which is like hockey and only played in the Highlands of Scotland).

But Erin became distracted watching Finlay who had bent over to tie his bootlace His pert butt stuck up in the air, the light blue cotton shorts becoming completely transparent as they became wet. He didn't appear to have any underwear on. She was willing him to stand up and turn around. Brodie leaned over and whispered something to him. Finlay nodded and straightened.
“OK guys. Practice over. See you next time.” He grabbed his shinty stick and picked up a few balls, tossing them into a box before heading towards Erin. “Are you mad, woman?” His face was scrunched up in an effort to shield his eyes from the lashing rain but her gaze was drawn downwards. He definitely wasn’t wearing any underwear.
“My skin's waterproof.”
He chuckled and wiped his thumb over her cheek. “Maybe, but your mascara's not.”
Oh no! She must look like a panda. She swiped at her cheeks and ran her thumb knuckle gently under her each eye, dismayed by the trail of black makeup left on her hand.
“Come on, let's go back to your place before I ravish you out here on the shinty field.”
As they walked the few hundred yards back to her house, Finlay placed his arm on her shoulder, bringing her in to nestle at his side.
“Your shorts are see-through,” she murmured as she reached a hand down to cup his groin.
“Erin, don't do that or I'll be in an awful predicament.”
“We're only a few yards from my gate,” she pointed out, glancing around for sign of life on the street. When she didn't see anyone, she became bolder and rubbed her thumb along his hardening shaft.
“You're wicked.” He opened the gate and followed her up the path. She reached into her pocket for her key but before she could get the door unlocked, Finlay spun her and pressed her back against the door, claiming her lips. Erin yielded immediately, opening her mouth and allowing him to plunge his tongue inside. He gently tickled her upper palate before tangling his tongue with hers. He held her close, clasping her around the waist and pressing his pelvis into hers. She broke the kiss and dragged his lips along his jawline and down the side of his neck. Something was jabbing her in the side.
“Fin, your stick is poking me.”
“Hmm, I haven't heard it called that before.” He captured her lips in a quick kiss before she pulled away again.
“I'm not talking about the one in your shorts. I mean your shinty stick.”
“Oh!” He laid it against the door jamb and bowed his head to kiss her neck. “By the way, it's called a caman. People will think you are a Sassenach if you call it a stick.”
“I thought Sassenachs were English people.”
“It's also a less than affectionate term for a lowlander.” Finlay now had his hands under her sweatshirt and was teasing her nipples with his thumb as he nibbled on her neck.
“Maybe we should take this inside.” She held up the keys, which were hanging on her middle finger. Finlay barely moved his mouth away from her neck, while he fiddled to find the correct key and put it in the door. There was a click and the door gave way. 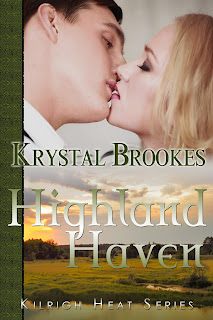 When Erin Murray decides to escape her past in Glasgow, she picks the small island of Kilrigh as her haven. Arriving at her new home, she's alone and scared, but is welcomed by the overly cheerful laird's son. But the tall, dark and sexy Finlay must earn her trust--something she's not willing to give easily.

Erinbegins to let the walls of her heart come down, only for her past to darken Kilrigh. Can Finlay keep her world from falling apart and can their budding relationship survive this threat?


Buy now from: Amazon UK or Amazon US