Today we’re Exploring ‘The Winter Girl’ my new release erotic romance from Hot Ink Press.
My books are all set in Britain, and more specifically England. There are so many historic and incredibly pretty old places that give me inspiration. Often a story will start up as I pass through, or stop over at a place when I am working. Lately I’ve been sent to buy and bring back items for the antiques emporium where I work. The Winter Girl is inspired by a place I stopped for lunch.
This country town is in the middle of a huge stone circle and surrounding ring ditch. A road runs right through and is quite busy, but in good weather, the place buzzes with tourists from all over the world. There is a main street with little shops and cafés. It’s not quite as big as the place I create for the setting of the book, but it’s gorgeously quaint and steeped in history. I found the characters of my book unfolding in my mind as I walked around the place, and especially my leading male character Starr Forrester. I would have loved to meet a real Starr Forrester there, but I didn’t. I’m in love with him at the moment he’s so sexy, creative, clever, and naughty…
There was a new age shop there on the main street and it had rows of trays with many different semi-precious stones in them. There were little cards with the meaning and properties of each stone printed on there, which added to my inspiration. The book has a touch of magic, but is contemporary erotic romance. 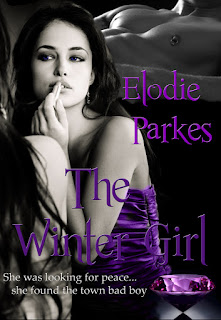 Lily Prescott is only just over a relationship break up when she decides to take up residence in a house left to her by her recently deceased grandmother. Her corporate law job takes a back seat as she licks her wounds in the small country town. She looks around the main shopping street and discovers people who will befriend her, but she also runs into the town’s most eligible bachelor and secret bad boy, Starr Forrester. Loved for his lifelong association with the town, Starr hides his methods for staying single well from his friends. He’s nearly thirty, gorgeous, a designer, owns a business and on the lookout for his ‘Winter Girl’….Will it be Lily? What is a ‘Winter girl’?
~Excerpt~
As he reached Lily again, he took her hand and pulled her out of the sliding window and along to his house. His front door wasn’t locked and he opened it and propelled Lily into the hall. She didn’t fight it because there was no strength behind it, but she was wary.
“Ash?” she whispered.
He turned to her. “Take your clothes off.”
She thought it must be some kind of test. She said she only wanted him, and now he was testing it. It was okay because it was true she always wanted him. He only had to look at her in a certain way and her nipples hardened. She started to undress.
Ash watched her. A flicker of fear at his own emotions made his voice husky.
She was naked in front of him and he unzipped his jeans. His cock was already rock hard and pushing at his shorts. He pulled them down to mid-thigh along with his jeans.
“Turn around Lily and bend over the table.”
Lily saw nothing but sexual desire in his eyes, and she felt a surge of wetness between her legs knowing he would be inside her soon. She throbbed as she saw his erection and she turned to the hall table. She pushed a package that was on it away to the left and bent over.
Ash wanted to take her by the bottom, spread her legs and fuck her hard. He felt the thought ripple through his cock, but he moved to her and caressed her back, reaching under to glide his hands over her breasts. He moved his hands to hold one of her hips, his other hand he slid between her legs and found her entrance wet. He thought he felt her throb before he pushed two fingers into her and placed wet kisses along her back. Lily was pushing back onto his fingers and moaning. He rubbed his cock along the top of her thighs. Moisture was seeping from him. He couldn’t wait any longer and he lifted her hips driving into her from behind. Lily gasped and thrust back on him.
“Make me come, Ash, I need you, need you.”
She was being slammed against the hall table and Ash suddenly realized. He stopped and moved her, taking her to her knees and holding her against him so that she knelt on the thick hall runner. He closed his eyes as she thrust back onto his cock and heard her low throaty sounds of pleasure.
Ash let her orgasm finish and then he held her so tight against his body her bottom felt like heaven against him as he came into her. His orgasm lasted a long time and he slumped over her afterwards. He rolled them onto their sides spooned, with Lily held against him and his cock still twitching half inside her.
****
Find Elodie on her blog and Facebook.

Find Elodie's books on  Barnes & Noble,
Amazon US and UK and Smashwords.


Elodie is running a giveaway to celebrate the release of The Winter Girl.
Win a $10 or £10 Amazon Gift card, enter via the rafflecopter.