Today we are excited to have a Hot Hump Day Excerpt from Dallas Nights by Em Petrova.

To get her truck out of the Texas mud, he might have to throttle her—if he can keep from ravishing her.

When hardened cowboy Dallas comes across an abandoned truck on his land, he’s shocked to find that the driver is his first love that crushed his heart. He plans to get her back on the road as quickly as possible before he breaks his resolve to trust any woman again, let alone her.

Ellie never expected to lose control of her truck or her emotions. Coming back to her hometown after all these years was a bad idea, especially since the one person who will always hold her heart wants her to leave. Can she keep running from her mistakes, or will owning up to the transgressions that hurt Dallas return his love to her?


“Dallas.” She threw herself at him. Wrapping her arms around him and hitching her legs around his 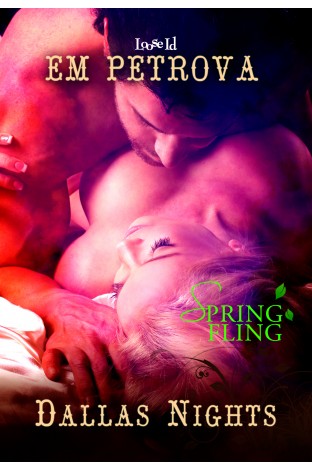 waist, she crushed her mouth to his. The sweet flavors burst on his tongue—vanilla and sweet Ellie.

A groan ripped from his chest as he held and kissed her, letting the tension build. For long heartbeats

they were still, learning the contours of each other’s lips again. He cradled her face, angled her head, and plunged his tongue deep.

She opened to him at once, gasping around his invasion. The velvety-hot feel of her tongue against his fanned flames of desire that had never been doused. But six years later, he wanted more. And he wanted it on his terms.

He backed her against the truck, pinning her. Locking his hands under her ass, he rocked his erection into her mound.

A ragged sigh left her, and he devoured it. Scooped it out with his tongue and fed her a growl in return.

She wiggled against him, and he slipped his hands over the curves of her upper thighs. Out of his head
with need, he jerked his hips, digging his cock into her pussy.

The desire to erase all trace of Nathan Rafferty or any other man since Dallas drove him on. She might not be his now, but he was damn well going to show her that she should be.

She knocked his hat off and tangled her fingers in his hair. Small squeaks erupted from her. Bracing her between his body and two tons of steel, he peeled off his flannel, then her tank top. The tiny triangles of lace covering her full breasts made his cock ache.

She pinched the cloth between his shoulder blades and hauled his T-shirt off over his head. He caught her gaze before slamming his mouth over hers again.

Violence welled within him—not the need to hurt her, but to claim her. Grinding a thigh between her legs, he sucked her tongue. She skimmed her hands over his chest, arms, and the planes of his back.

Now he groaned, “This isn’t going to be gentle. I can’t wait another minute for you.”

“Mmm.” She bit at his lower lip, which only drew his beast to the surface.

He whirled away from the truck with her and spread her on the soft grass around the pond where they’d been lovers years before. Her hair tumbled around her face, her ponytail elastic lost. Staring up at him, she smiled.

Could he allow himself to feel for her again? He shoved down the emotion and palmed her breasts. The weight in his hands was like coming home.

~hardworking heroes—in bed and out~