Hot Hump Day Excerpt: He's So Into You by Roxy Wilson

Thanks to Roxy for this smokin' excerpt today. Some of us in the UK need a little warming up and this is bound to do the job!

~~~~~~~~~~~~~~~~~Excerpt~~~~~~~~~~~~~~~
Jordan sat on the sofa. “Take off your clothes, beautiful.” His voice sounded raspy to his own ears. “Do it slowly.”
The scowl on Raina’s face was priceless. She arched a perfectly groomed eyebrow. “I hardly know you and you want me take my clothes off? Are you kidding me?”
“You wouldn’t be here if you thought I would do anything to hurt you. So, here’s the thing, I’m not going to repeat myself,” his voice was thick with emotion, and just the faintest note of warning. Her confession had really done him in. It was hard to imagine the beautiful woman standing before him had endured so much pain by a brute she had given her heart to and trusted. But, he’d be lying if he said she didn’t affect him physically, as well. His cock was so hard he felt it could bore a hole through his Levi’s. Jordan surreptitiously adjusted himself, since he didn’t want it to get sore before he’d even had a chance to use it on this tantalizing woman. At least, he hoped he’d have a chance to use it.
Jordan had every intention of doing and saying everything he could to make Raina see, without a shadow of doubt, she was attractive and a person deserving love, affection and the best life had to offer her. He heard her mutter under her breath. By the look on her face, he wouldn’t be surprised if she had a few choice words for him, but he didn’t let it faze him one damn bit. Jordan almost applauded when he saw his Raina—No, just Raina, dammit, hesitate only for a moment. When she released the band of her dress and peeled it slowly down her arms, exposing little by little, her surprisingly slender collarbone and the dark mysteries of her lightly powdered cleavage, Jordan felt as if he had died and entered paradise. He silently urged his greedy hands to stay still, because at the moment he wanted to grab her and plunge his tongue deep enough into her mouth to hit the back of her throat. After what seem like agonizing minutes in a gas chamber, he released his breath in relief when the damn dress finally fell to the floor. His baser desires were still not completely under control by the time she stepped out of her dress and kicked it aside.
Raina smiled shyly at him. She reached behind and unhooked her red lace bra, and slowly slid the straps down her arms and tossed it aside. Jordan almost shot his cum in his pants, like a sex-starved teenager, when he saw her generous breasts. Her nipples were so incredibly suckable. Jordan resisted the temptation to reach out and touch them right then and there. Raina hooked her fingers in the waistband of her scrap of underwear and gently rolled them down her thick thighs. Only a second later, she chucked them aside as well.
Jordan’s breath caught in his throat when his eyes zoomed to the center of her body. Her bald pussy almost had him coming undone. It was slick from her arousal and he could just glimpse her swollen clit.
Shit. Shit. Shit.
~~~~~~~~~~~~~~~~~~~~~~~~~~~~~~~~~~~ 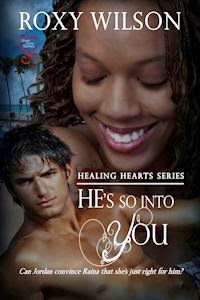 Being badly injured in a plane crash and feeling responsible for losing his fiancé keep Jordan Cooper from getting involved with another woman, but his best friend Caleb talks him into going on a blind date. He’s surprised that in a short time his feelings for Raina Abbott runs deep. Jordan wants more than just one night with her, but he has to convince her first.Leaving an abusive ex and ending an unhealthy relationship with food still aren’t enough to help Raina Abbott overcome her feelings of insecurity, but her best friend Jayce convinces her that going on a blind date is the first step to boosting her self-confidence and feeling good about herself again. Jordan Cooper shows her that she’s beautiful, both inside and out, but can a date and one night of passion assure her that he’s really into her?