Thanks so much to Jessi for this excerpt to keep us all going for the week. Definitely one to be added to the TBR list!

~~~~~~~~~~~~~~~Excerpt~~~~~~~~~~~~~~~~~~~~
“You’ve got too many clothes on, sweetheart,” he said, jarring her out of her stupor. “And you’re much, much too far away.” He held a hand out to her. “Come here so I can fix both of those travesties.”
Heat flashed from her neck to her core. This was exactly what she wanted. His attention. His affection.
But not like this. She hardly knew him, and he was looking at her like that didn’t matter, like he’d made her up and could use her without consequence. His cocky grin irked her and turned her on at the same time.
She sat back on her heels and shook her head, too conflicted to form words.
“Pretty please?”
“I-- Uh, um--” Jeez. Who should she blame for that genius utterance, her suddenly pouty lips or her flustered brain? To be safe, she’d have a talk with both of them later. For now, though, she clamped her mouth shut and resorted to shaking her head again.
He put his hand back behind his head. His grin grew wider. “There’s nothing to be afraid of.” His eyes twinkled. “It’s just a dream.”
Her heart skipped a beat or twelve as he threw her words back at her. “Is it?” she said, her voice barely there.
“You bet.” He propped up on his elbows. The comforter slid down to expose the mounds of his pectorals. His nipples puckered like copper rivets. A sudden urge to test their hardness with her tongue had her leaning forward. She caught herself, but the unintentional movement didn’t go unnoticed. Triumph radiated from his every pore. “And not just any dream.”
The mischief in his voice disarmed her. How could a man be intimidating and playful at the same time?
“Oh?” She quirked a brow, finding her way with him.
“You see, this is my dream. I chose it. Over another. One that wasn’t so sweet.” He flipped back the covers and patted beside him. “So what I say goes. And I say come up here where I can get a better look at you.”
“Are you always this bossy?”
He shrugged one impressive shoulder. “That’s why they pay me the mediocre bucks at the job site.”
“You work construction?” Yes, yes. Talking. Normal people didn’t jump between the sheets with total strangers. They had conversations. They got to know each other.
The man nodded once, then raised an expectant eyebrow and patted the bed again.
She bristled. “Aren’t you going to ask what I do? It’s only polite.”
“I know what you do.”
She blinked, stunned. “You know me?” Hope propelled her forward. “What do I do? Who am I?” She stopped short of grabbing his shoulders and shaking him, but barely. Finally! She’d learn her name!
The man wasted no time wrapping an arm around her waist and pulling her down to lie beside him. She was so relieved, she let him. He wasn’t a stranger after all.
“You’re my dream girl. Your job is to make me happy. And you deserve a raise, ’cause--” He lifted the blankets and pressed her hand down the line of his body.
The satiny smooth head of his penis heated her palm as it poked above the waistband of his boxer briefs.
“Ohmygosh!” She snatched her hand back and rocketed off the bed. Back pressed against the closet door, palm glued to her chest, she said, “You--I--what the heck?” Another brilliant bit of dialogue. Her brain had overloaded, plain and simple. She swallowed and composed herself. “Sorry. I didn’t mean to freak out. I just hoped we knew each oth--”
The man interrupted her with a curse directed at the ceiling. He fell back on his pillow and threw an arm over his face. “Can’t even hang onto an imaginary woman. Too goddamned aggressive for my own dream girl.”
He cursed again, a long, drawn-out whisper. Then he lifted the covers and looked down at himself. “What am I going to do about you?” He glanced at the clock, which read 4:58. His whole face softened as he pressed a hand flat to the wall over his head. Haley slept on the other side. “Nothing. That’s what.” He rolled over with a pained grunt and went back to sleep.
Her throat closed with longing. Longing to crawl back in bed and put his arousal to good use. Longing to tell him he hadn’t been too aggressive for her, that if she’d been scared of anything it had been the strength of desire his forwardness had kindled in her. Longing to show him she wasn’t imaginary. 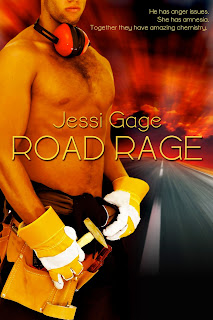 Lashing out in anger, construction worker Derek causes an accident on the freeway. His truck escapes unscathed, but he can’t say the same for his conscience. Plagued by nightmares of the wreck, his only comfort comes in the form of nightly visits by a mysterious woman who interrupts his dreams with sensual caresses and words of solace.
Cami has no idea who she is, until she wakes in a hospital bed and learns she’s been comatose due to a car wreck. Her visits with Derek must have been a dream, so why can’t she shake the feeling he was a real man who truly needed her help?
When Derek learns his mystery woman is none other than the driver of the car he cut off and she is fighting for her life, he must decide: Is he man enough to face her and ask forgiveness, or will he run away and avoid the consequences of his anger, yet again?
CONTENT WARNING: Sex with a perfect, imaginary dream girl who really isn’t imaginary
A Lyrical Press Paranormal Romance
Purchase Road Rage from Amazon and B&N