"Oh, okay." Royanne seemed to accept who he was. But then, he knew she would; being a demon with the ability to possess minds, he could easily mold her thoughts. She stepped out of the doorway more into the alleyway.
That's good, feel comfortable with me.
"I saw you dancing, you move well," he commented.
"Thank you. I am Royanne." She offered her hand.
Yes, contact, that is what I need again.
He took his hands out of his pocket and reached out. His large, calloused hand enveloped hers, and her warmth met his cold. She was soft, and he wondered if the rest of her was the same.
"I'm Zach, good to meet you," Zach replied while inching closer. Touching her was enough to establish a link to her mind. I have you now. She was still wary but calm. Underneath the layers of her mind was something else. Need. This I can work with.
"So, how you finding life at base?" he asked, still holding her hand.
"Well, you know fun, fun, fun!" she replied sarcastically.
He could feel she was unhappy.
"It all helps for the future, you know." He sensed her need for freedom.
Royanne moved her hand away, but he noticed she lingered at little as they released their grips. He had her now; her mind was his, but he needed more. A taste of her, then the link would be stronger. Damn, there were too many people passing the entrance to the alleyway for him to make his move now. If he got her wanting him enough to go to a hotel room, that would be perfect.
He could read strands of desire in her mind. He planted more, he planted himself. This little Guardian was proving easier to manipulate than he had first thought. But what did they know of strength? All their kind was good for was the torture of the young and weak. He was no longer young or weak. The Dark Master had ensured they took care of him, nurtured, and trained to be a warrior of worth. Zach reached out and touched her bare arm lightly. With feather-like fingers, he stroked her skin. Royanne's gaze drifted to his fingers playing on her skin. She had not recoiled, which was good. He became bolder as he moved his hands to her shoulder. Her skin was warm and smooth. Zach maintained eye contact, knowing it would strengthen his bond with her. He caressed her cheek, and he slid his other hand lower to hold her curved hip and then her rounded ass. He massaged her ass cheek, and when no resistance was apparent, he lowered his lips to her pinky full lips, that called to him to kiss and claim. She seemed frozen to the spot. Yes, just as he liked them, under his control, helpless. He had her mind.
Fire met ice. She kissed him back with equal force, which surprised him. Does this Guardian actually want me? Her hands drifted to his hips, and he felt her grip tighten, and she brought him closer into her. Oh hell, she tastes so good. He let his tongue play with her mouth, then dart between those parted  sweet lips. Her mouth was wet and warm, just as he hoped her pussy would be when his cock entered her. He cupped her breast with one hand and found her nipple taut. Kissing down her neck, he lowered her strap down her shoulder to reveal a heavy breast waiting for him. He played with her nipples with his fingers before his mouth took over. He licked them all over, the tip of his tongue flicking backward and forward.
"Oh yes," she groaned.
Then he took her wet nipple into his mouth and sucked hard. Her hips moved with every suck. Zach wondered how wet she was. He continued sucking but used one hand to lift her dress up and brought the other hand straight to her panties. He was delighted to find them getting damp. He pulled the seam aside, and he discovered she was smooth.
"Oh, so wet for me, Royanne," he said as he kissed down her stomach.
Her mind told him she wanted his mouth where his fingers played. He tore the scrap of material away and lifted her leg over his shoulder. He hungered for her, so he went to work with his mouth and tongue. Licking around her swollen lips, he sucked her clit before letting his tongue establish a rhythm. Royanne moaned and grabbed his head, pushing her hips farther into his face. The enemy tasted divine, sweet and musky. She was so close, he could read her fully now.
But no! Control was important now. He could not let her come here in this alleyway; he needed her alone to complete his mission. He stopped and got to his feet. Her eyes were dazed, and her mind was confused.
"Why did you stop?" she questioned.
"Not here." He scanned the alleyway. "I want you on a bed where I can enjoy you fully." He knew she agreed. 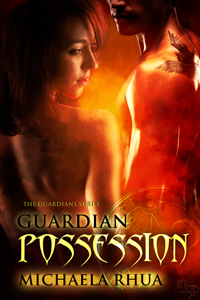 Royanne longs to be free of everyone's expectations. Meeting a mysterious stranger who she is drawn to confuses her. He feeds her longing to be free and ignites a fire inside of her. She is aroused by this tortured soul. When he kidnaps her and reveals his plan, she is torn between loathing him and wanting him.
Zachriel is under orders from the Dark Master—kidnap Guardian demon Royanne. Only hiding away until the coast is clear draws him closer to her, especially as she seems to see the real man in him.
Rescued at last, Royanne feels uncertain what to do. For Zachriel his past is revealed and he must face the truth. This truth cuts to his very soul and questions who he really is. Now he must come to terms with the lie that has been his life. Royanne fights her feelings for Zachriel. She begins to see him as a kindred spirit. There is only one thing to do reveal her love for him. Can she convince him her feelings are real and he is worth loving?