Please welcome Anne to our blog today! She's share this ho-ot excerpt from a book with an equally hot title, Hot Mess! Enjoy!

~~~~~~~~~~~~~~~~~~~~~~~
He followed her to the front door, and as soon as she had unlocked it, and led him inside, he wrapped his arms around her.  Rachel tried to push away, but her attempts were feeble, at best.  She knew what would happen as soon as they talked, and she wanted to enjoy him while he lasted.  She surrendered to his grasp, then to his kiss.
Sam slanted his mouth over hers, and she opened up for him, knowing in her heart that this kiss would probably be their last.  That was her last coherent thought for a while.  His tongue invaded her mouth, conquering it with thrusts and swirls around hers.  His hands gripped her waist tightly, pulling her close to him.  Rachel dug her hands in his hair, unwilling to let go, seeking his heated mouth to take her, make her forget.
He groaned into her mouth, a low, throaty sound that made her knees weak.  Sam's hands reached around and grabbed her rear, lifting her against his erection, and setting her atop a Bombay chest in her entry way.  She whimpered, and Sam's mouth moved to her jaw, branding her with hot, wet kisses to her earlobe, before pulling it into his mouth and sucking.  A shiver of delight shot through Rachel.  She grabbed his shoulders, and leaned back, giving him access to more of her skin.
She moaned as his mouth continued trailing kisses down her neck, while his hands slowly pulled the straps of her dress off her shoulders, leaving kisses in their place, freeing her breasts.  He kissed one, then the other, while his hands toyed with them alternately.  Rachel had never felt anything close to the exquisite torture that Sam's mouth was putting her through, and she didn't want it to stop.
One of his hands traveled slowly to her skirt, pulling it up around her hips, then reached down between her legs.  A gasping moan escaped Rachel, and it was a foreign sound.  His hand found her heated wetness, and she could feel him smile around her nipple in his mouth.  She suddenly wanted him everywhere, against her, skin on skin.
Against her will, her legs opened, and Sam stepped inside, before she wrapped them around his hips, squeezing, pressing against him to relieve some pressure.  Sam's mouth traveled back up her neck to her mouth, as his fingers went to work on other parts of her body.  One hand stayed on her breast, twisting the nipple into stiff points.  The other hand stayed in her panties, and began circling the nub there, eliciting a shocked gasp.  Alarms clanged dimly in her subconscious, as she tried to sit up, to stop him.
"…Wait, Sam…"  Her hands moved to push him back.
"No."
"Excuse me?"
"Just feel it, Rachel."  He whispered into her mouth.  His voice was so seductive, she had no choice but to comply.  His tongue continued its merciless assault on her mouth, and she was helpless to interact with it.  She just reacted, while he made love to her body with his hands and mouth.  The alarms continued to clang dimly, a warning sound, saying, "Danger.  Danger."
When he slipped a finger inside her heat, she moaned into his mouth, and Sam began to move a little faster.  His thumb circled her clit, while the inserted finger danced in and out of the slickness.  He groaned against her mouth, as he pushed his erection against her thigh, showing her how turned on he was.
When he slipped the second finger inside of her, and curled them both up slightly, the thumb continuing its circular motions on her nub, Rachel convulsed against him as waves of exquisite pleasure rocked her body.  Sam's mouth swallowed her guttural moans and gasps as she came around his fingers.  The shock of the intense sensations reminded Rachel of what happens when hormones ruled.
Tears sprang to her eyes, unbidden.  What had she done?  This had gone way further than the simple hug and kiss she had intended to allow before they had their talk, and now, here he was, planning to pick her up and cart her off to a bed, to make wild dangerous love to her.
"Sam…I…"
He did it.  Sam's arms slipped around her, and picked her up, starting down the hallway in the direction of her bedroom.
~~~~~~~~~~~~~~~~~~~~~~~~~ 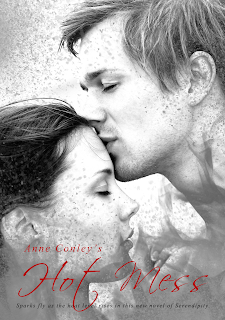 Sam is a single dad trying to get over the death of his ex-wife, and help his daughter move on from the loss of her mother.
​
Rachel is a single mom with a secret of her own that has kept her out of the dating scene for years.
﻿
What happens when this drop-dead gorgeous firefighter moves in across the street from the reticent woman with a past?
﻿
Sparks fly as the heat level rises in this new novel of Serendipity.

Purchase Hot Mess on Amazon, B&N and Kobo and find Anne on her website and Facebook page.