Thanks to Crystal for a bit of heat to get us through the week! Read on for a great excerpt.


~~~~~~~~~~Excerpt~~~~~~~~~~
As they stood from the bench where they had been sitting, both brothers revealed beautiful, well-toned bodies with nearly identical erections jutting from their naked loins. My jaw dropped. I don’t know whether I was more surprised that they were naked or at the sheer, overwhelming lust that seized me. Either way, I was frozen in mid-stride.
“We think you should take off the swimsuit, too,” they chorused.
“Oh, m-my god!” I stammered.
There it was again, the quick look between them, and then they waded toward me, hands outstretched to enforce their demand that I take off the suit. I could run, or I could scream. I wasn’t going to do either one.
It was then that I knew with a certainty that rivaled anything I had ever known; I was about to have a grand adventure. Not one brother, but both! Ho-ly shit! I stood there, electrified as they reached me, each one reaching out for a suit strap, each one claiming a breast as it was freed from the suit. The cool air hit my nipples, and they immediately puckered. Yes, of course it was the air. How could I possibly have been so turned on so fast? As the brothers peeled the suit further down and exposed my mound, the cold air also caused me to become quite moist between the legs. Oh, wait. Cold air doesn’t cause that, does it?
We waded back toward their drinks, abandoned on the side of the spa when they came after me. As they seated me between them, Jon said, “Are you sure you don’t want a drink?” At the moment, I would have gladly taken a shot of tequila, but I didn’t want to take the chance that they would change their minds about being naked with me in the spa. I’d do without, but my mouth was dry. I would have to find a way to fix that.
Jon helped at that moment by putting his hand on my throat and tilting my chin back. His eyes, dark in the moonlight, glittered as he claimed the first kiss. His fingers joined his tongue, invading my lips, forcing me to open to his deep kiss. This was the most intoxicating kiss of my life, maybe because I knew the hand on my breast and the other one that was questing downward didn’t belong to the man who was kissing me. One of his hands was still on my throat, and the other one was tangled in my hair, holding my head still. His tongue and breath tasted of Scotch, which suddenly became my favorite liquor. Time stopped, and I only knew the kiss. I could die happy during a kiss like that. 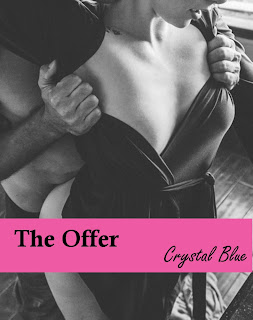 Intended for mature audiences 18+. All characters depicted are 18 or older.

Purchase from Amazon and Smashwords