Hot Hump Day Excerpt:Falling for Him by Anne Conley

Thanks to Anne for sharing this excerpt from her upcoming Christmas novella.

~~~~~~~~~Excerpt~~~~~~~~
"Amy, I'm sorry…For everything."  He looked lost, and she felt a pang of something sharp inside.  Was it regret?  She didn't think so.  Bryan approached.  "I know I haven't been the best husband to you lately, and I'm sorry.  Let me try to make it up to you.  Please?"
"How?"
He grasped her face in his hands and kissed her tenderly.  She couldn't remember when he had kissed her like this.  It didn't matter.  A gentle kiss, no matter how swoonworthy wouldn't undo years of making her feel taken advantage of.  She pressed her lips together in an attempt to thwart his advances.  His hands moved from her face, one to her hair and one to her waist, pulling her closer to him, as he tried to deepen the kiss.  Amy could feel his tongue moving across her lips, urging them open.  She reluctantly acquiesced, remembering the last time they had had sex and how he wouldn't even look at her.  His tongue made its entrance and probed her mouth, its warmth sending an unwilling tremor through her body.
Without letting go, Bryan began leading her to the bed.  Amy broke away with a gasp.
"What do you think you are doing?"
"I'm making love to you.  The way you deserve, Amy."
"What about Brad?"
"He's down the hall, immersed in video games.  He won't come up for air for hours."  She remained stiff in his arms, unwilling to sink to the bed, to his wishes.  "Please?  Let me at least try…"  The pleading look he sent her tugged at her heart strings, but she was still unwilling to bend.
"I'm really not sure it will work."
Bryan pushed her gently onto the bed, lowering himself on top of her.  "Look.  I know I've messed up, big time.  But you have, too.  Admit it, and let me at least try to make up for what I've done.  Please…"  His heated gaze on her was filled with desire, with longing, with love…with everything she'd wanted to see.
"Okay."  At her word, he crushed his mouth to hers in a searing kiss, and she opened up to him.  With a triumphant groan, Bryan began pulling at her clothes, slowly undressing her until she was naked beneath him.  It was unlike anything they’d done recently.  In fact, she couldn’t remember him undressing her since Ashley was a baby, and even then she’d hurried him along before the next feeding.
He kissed down her jaw to her breasts, then pulled away to look at her.
"You've been working out?"  He questioned Amy, a simple question, but it spoke volumes.  He knew.  Somehow he knew she was talking to someone else.  Maybe he thought she was having an affair like his, maybe it was his guilty mindset wanting to place his own guilt on somebody else's shoulders.
"Yes," she squeaked.  The absence of his mouth on her skin left a void inside her.
"You look good."  His voice was husky with emotion, and he lowered his mouth to her breasts.  As he suckled first one, then the other, Amy felt a welling up of remorse inside her.  She willed it to subside or else all would be lost.  Her plan, her life, herself.  So she shoved the emotions aside, and gave in to sensations.
His hot mouth on her breasts was replaced by his fingers tweaking her nipples, as he kissed lower on her abdomen, swirling his tongue in her navel.  The shudder it sent through her was shocking, and she was panting by the time his tongue stroked the apex of her thighs.  She jolted upwards and grabbed his hair, unwilling to let him stop the maddening torture. 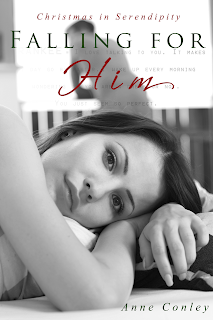 Anne Conley's Christmas novella, Falling For Him:  After eighteen years of marriage, Amy has finally found a man to talk to.  And it’s not her husband.  She’s tried everything she can think of to put the umph back into her marriage, but when she meets Cool_Hand_Luke in a movie chat room, he validates her thoughts and opinions in ways her husband seems incapable of.  With the holidays fast approaching, Amy tries to hold herself together for her family while simultaneously exploring her new online relationship.  When she finally agrees to meet the online stranger, Amy realizes that what she thinks she wants and what she actually has aren’t really all that different.