I have a Halloween romance suspense novella out ~ 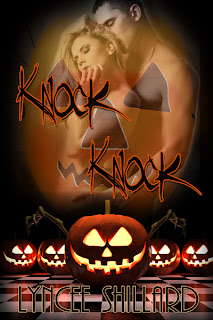 Knock Knock…. Answer if you dare.

New to Kanna, Florida, Lila Maxwell attends All Treats, a Halloween speed dating event in the hopes of meeting Prince Charming but instead one Halloween ghoul after another appears at her door until Cowboy Bill.

Jax Carlson has spent the last year focusing all of his attention on starting his own business. Hiring Lila Maxell over the Internet as his project manager was the completing task. Set to open for business in three days, Jax plans on spending a couple of days on his boat relaxing. However, his friend Erik has a different idea – a speed dating Halloween party.

Jax has spent the night plotting the best revenge possible for Erik until Sally opens the door. The woman dressed in the pale lavender Harem costume ignites a fire that Jax thought was impossible without the aid of his formulated dating list.

After a night of mind blowing sex, Lila sneaks out before they exchange real names believing it was no more than a one-night stand.

When Lila reports to work she learns Cowboy Bill is actually Jax Carlson. She thinks keeping her hormones in check while convincing Jax that love doesn't follow a formula is complication enough until she learns the participants of the All Treats speed dating event are being killed.

Knock Knock is available at Amazon

Excerpt:
Jax walked over to his sister's painting supplies and started putting the lids on the small tins of gold and black.
"I can take care of my own mess," Aimee said walking up to him. "I'd hoped you would come to our Halloween party tomorrow."
"I'm a thirty-year-old man, not a child." He didn't understand why adults wanted to dress up and behave like children.
Aimee sighed. "You act more like one hundred and thirty. Jax, if you don't start having some fun in your life, you're going shrivel up and die."
He ignored his sister and looked back at Erik. Her comments about his life were based on some irrational thought pattern she'd developed as a child and never outgrew. His friend just shook his head behind her back. He'd met Erik in fourth grade and they had been friends since. Erik's lack of a drive to achieve greatness in life and non-opinionated view on everything made him the perfect friend. They didn't compete in anything so Erik never felt slighted when Jax would have won.
"Aimee, sweetie, why don't you carry your paint stuff out to the car and I'll see about getting Jax to attend our party," Erik suggested winking at Jax.
"Right, I'll leave and you two will discuss ways Jax can get you out of the party," Aimee stalked over to Erik, her cinnamon brown ponytail bouncing. "Not going to happen unless you never want to sleep in my bed again."
Erik laughed and kissed her cheek. "Sweetie, I've looked forward to dressing up like Paul Revere for weeks now."
Aimee gave them both a narrowed eyed glare and left.
"Why do you want to dress up like Paul Revere?" Jax asked.
"I don't, but I want to continue to have sex with your sister." Erik walked over to the couch and fell into it while swinging his feet up on the coffee table in one move.
Jax held his breath to keep from channeling his grandmother and yelling at the man about the proper way to use furniture. He did need a break. For the last year, he'd poured everything he had into getting Carlson's Solutions up and running. A few days on the boat would give him the break he needed to clear his head without wearing funny cloths.
"I think your sister has a point. Anytime one man wants to correct how another man sits, he needs a good fuck." Erik leaned back putting his hands behind his head.
"It takes a lot of effort to find the right woman to make a sexual encounter mutually satisfying. Seven meetings at a variety of neutral places, then at least two planned dates and I've been too busy to take that time."
"Or you could have taken a night off, hit the sports bar and picked up some chick whose tits and ass turned you on."
Jax shook his head and sat down across from his friend. "Encounters like those rarely produce truly beneficial outcomes."
Erik grinned. "I seem to remember having a few that ended with both of us smiling into our morning coffee."
"Few memories are accurate. People warp them to fit their perspective."
"So how did Leon react to your notice? A cordial walk down the cubical aisle to the exit?"
"He was pissed. Told me I'd never find a job. I told him I knew he would be petty like that so I started my own company. After a few seconds of watching the vein pulse in his neck, he said I'd never land a client." Jax smiled remembering the look on Leon's face. "So I told him not to worry five of my core clients had already agreed to give me a shot. Now to sit back on my boat and relax until my first meeting in four days."
Erik swung his feet off the coffee table. "About that. I get you don't want to come to our party because it's mostly couples."
"No, I don't want to dress up and make mindless conversation," Jax corrected him.
"Me either but that's beside the point. Your sister is driving me nuts about getting you out before you turn into some old man with volumes of stamps that you spend days staring at."
"I'd never do that. I have no interest in collecting stamps," Jax told Erik.
"Here is a flyer to a singles dating party called All Treats. Aimee will be disappointed you didn't come to our party, but she'll be happy you're out. And who knows you may even manage a hook-up." Erik pushed a piece of paper toward him.
"I'm not going to your party or this event for losers. Have you lost your mind? Did you get hurt at work?" Jax knew sometimes Erik's job as a private investigator lured him into dangerous positions.
"No, my mind is fine," Erik sighed. "I had hoped you do this willingly. If you don't go to All Treats, I'll tell Aimee you threw away the birthday cake she made you without even trying it."
Jax went to reply but Erik held up his hand. "And tell your grandmother that I deliver the socks and underwear she sends you every year for your birthday to the homeless shelter."
"Are you trying to blackmail me?" Jax stared at his friend. No humor danced in the man’s blue eyes. His mouth formed a tight line.
"Not trying. I am. Don't make me print out the pictures of the cake in the dumpster and the receipts from the shelter."