Today I would like to welcome Em Taylor to the blog. She is going to give an exclusive first look at the
cover for her up-coming release, Saved by a Rake and give away a $10 Amazon gift token via Rafflecopter.

What’s your name and where do you come from? My name is Em Taylor and I come from the south of Scotland.

Tell us a bit about your latest release. My next release is called Saved by a Rake. It’s my first foray into Regency romance. It tells the story of Lady Rebecca Eversley. After she had been ravished and possibly ruined by the Earl of Newthorpe, she must face the gossips of the ton or spend the rest of her days as a lonely old maid in the country, away from the scandal. She chooses the former.  She meets Lord Daniel Ramsey, a notorious rake who has been ordered by his father to marry soon or lose the majority of the money he is due to inherit. Everything seems to be working out until the morning of their wedding when they find out that the Earl of Newthorpe has been found murdered.

What’s your biggest turn on? A man’s hips and his mind. He has to have as much going on upstairs as downstairs. But I do love that v line of the hips.

If you couldn’t be an author, what would your ideal career be? Lottery winner. To be honest, nowadays, the only thing I can contemplate doing is writing. It has become part of me.

Do you have a favourite character from your books? Why are they your favourite? This is my first book as I said. I have been published before under another nom de plume (don’t judge me. Mark Twain had a few before settling on Mark Twain). I love my main character Rebecca. She looks weak but she is actually really strong and has real determination and grit to face up to the gossips in the ton.

What do you do to unwind and relax? Because writing is not my main job, I write to relax. I also mess around on Facebook, Twitter and Tumblr.

What’s your greatest weakness? Procrastination. Why do today what can be put off until tomorrow. This is why I’m always the one sneaking over the winning post of Nanowrimo at 23:56 in 30th November.

How do you decide how hot or not your book is going to be? I let the characters work that out for me. Obviously the language is dictated by the era, but the actual amount of sex is decided by the characters themselves.

Is the stuff you write about from experience or mostly imagination? I think it is a total mix. Though I do need to make sure that I force my imagination out onto the page or I get in trouble for not putting in enough description. I forget that just because I see it clearly, the reader does not necessarily see what’s in my head unless I spell it out.


Tell us something that might surprise our readers. I have never read a Jane Austen book all the way through.

The dance was called. It would be a waltz. Rebecca flushed slightly as he approached.

“Oh, Lord Ramsey. I am not sure a waltz is the most appropriate dance tonight?”

“The waltz is not to your taste, Lady Rebecca?”

“Oh I love to waltz. It’s just…” She blushed deeper and fumbled with her fan. He leaned close.

“As you know, the gossips like fresh news every day to discuss at their morning visits. I would suggest that we give them something other than the Earl of Newthorpe to discuss.”

Her eyes widened—then she smiled and accepted his arm to be led into their first waltz together.

He twirled her onto the floor before snaking his gloved hand around her waist. She stiffened and he moved backwards instinctually. Then she relaxed again as she looked up into his eyes. She placed her hand on his shoulder and her other was placed in his hand.

“All right?” he murmured as he considered faking a twisted ankle if it looked like she was going to freeze again. He had no doubt that, after her ordeal, she had no wish to be touched by a large, strong and virile man, even if half the ton was in attendance at this ball.

The music started and she nodded before taking a deep breath and allowing him to lead her around the floor.

He would have wished to dance slightly further apart than was strictly necessary in order to give her the space she obviously desired but, as always was the case with the supper dance, the dance floor was busy.

He gripped her waist and pulled her closer as he turned her effortlessly before waltzing her past the open French windows. He asked her about her home this time, in an effort to take her mind off their close contact and keep her at her ease.
As she relaxed into telling him about Chapelbrooke, her back became less rigid and her movements more fluid. He had to concentrate on her words to distract himself from the feel of her ball gown brushing gently against his own ankle every time he turned her. He could have quite happily danced with her all night, listening to enchanting stories of her girlhood and gleaning small bits of information with which to tease Eversley for years to come.

And now for the big cover reveal: 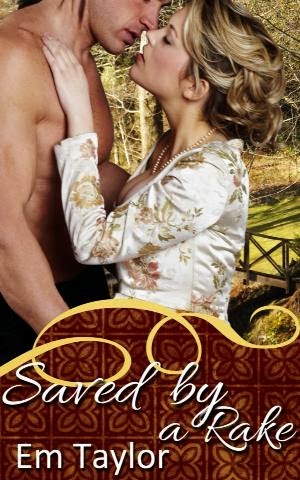 Saved by a Rake will be available at Amazon on 22nd November 2013
a Rafflecopter giveaway
at 08:00