Thanks to Kelli for this hot and naughty excerpt. Warning: Don't read in public! :D

Annabelle pulled on the leg restraints as Vincent pumped into her. The orgasm she so desperately craved was out of reach.

Annabelle saw that Julian and Sabrina had changed positions. Now Julian knelt behind Sabrina on all fours, screwing her fast. Sabrina’s large breasts jiggled as he fucked her.

“Yes!” Vincent tensed and grunted as he came. She bucked her hips up, hoping that Vincent’s orgasm would make her come, as well. He quivered inside her, then sighed and lay still.

“Please…please…keep going,” she begged, writhing on the bed. If only Lobo would release her hands, she could touch herself and relieve her wicked pain.

“You want more cock?” he asked as he pulled out.

“Lobo, ball her until I return,” Vincent ordered, as he stood.

She was going to be screwed by Lobo? Her body throbbed at the thought. Lobo released her hands and stripped out of his black breeches. Annabelle reached up and stroked his limp cock with one hand, while squeezing his hairy balls with the other. Lobo gasped, and his penis grew from a thin noodle to a stiff shaft nearly as long as her arm.

Annabelle pulled him to her, eager to taste his meat. Lobo bent forward and she wrapped her lips around the head of his cock. He winked at her as she sucked him.

After a minute, she released him, and Lobo walked to the foot of the bed. He mounted her, then shoved himself inside, filling her to the core. She curled her arms around his wide shoulders as he fucked her hard. Lono and Lobo never spoke, but they obeyed orders without question—and it was always fun!
~~~~~~~~~~~~~~~~~ 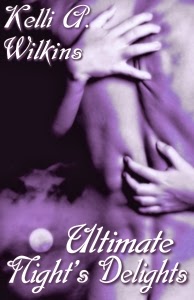 Julian and Annabelle are back for the final ball!
The Marquis of Demby’s Midsummer and Midwinter Balls changed Julian and Annabelle forever. Freed from their inhibitions, they now help other shy couples explore their sexual urges and hidden desires.

But life on Vincent and Sabrina’s estate is anything but tranquil. The notorious Duke of Blackwell has discovered the secret about the naughty balls and is out to destroy the marquis.

Catch up on all of Kelli’s romances on her site: www.KelliWilkins.com.