Please welcome our Saturday storyteller, Shona. She's talking about her upcoming release and getting romantic!
~~~~~~~~~~~~~~
What’s your name and where do you come from?
Shona Husk and I live in Perth, Australia.
Tell us a bit about your latest release.
Lord of the Hunt was released on January 7 and it’s the second book in my Annwyn series (book 1 was The Outcast Prince). Set between our world and the fairy world of Annwyn the series centers around the dying King and the failing magic. Each book has its own hero and heroine. In Lord of the Hunt the hero and heroine discover just how treacherous the Court can be even for those with power. Digging into the fairies schemes and power plays was a lot of fun!
Where do you get your inspiration from?
Everywhere. Pictures, newspaper articles, mythology or even random conversations.
The Annwyn series was inspired by a discussion on mazes, and what they could be made of, with my kids. They thought a maze couldn’t be made of glass…I immediately imagined a place where you could see what you wanted but had to follow a complicated set of rules to get it—the fairy Court of Annwyn was born.
How do you go about creating the perfect "Swoon" worthy man?
Firstly the heroine has to find him attractive, as it’s through her the reader finds the hero attractive.
Since first impressions count he has to look the part. For some heroes this might mean a suit and tie, for others jeans. Verden the hero of Lord of the Hunt is very pretty like all fairies, but Taryn notices that he doesn’t dress as flashy as the rest; he doesn’t quite fit what she expects for a man of his rank.
Interest and intrigue are very important ingredients. The hero has to be someone the heroine (and the reader) wants to spend time with. Curiosity has to be aroused…
Add a dash of humor, a good heart and a killer smile and the hero is on his way to being swoon worthy:)
What do you do to unwind and relax?
I like to run (something I never thought I’d say but after taking up running 18 months ago I’ve come to enjoy it), read, do cross stitch while I watch TV.
What’s your greatest weakness?
Dark chocolate. I love it and I eat far too much of it….thus the running.
How do you decide how hot or not your book is going to be?
I’m not sure. Good question :) Ideas usually bounce around my mind for quite a while before I start plotting or writing, so by the time I put something to paper the idea is reasonably well formed and I know if it’s scorching or sensual. When it comes to the actual love scenes I go with whatever happens as by that time I know the characters and how far they’d go, or wouldn’t go. Sometimes they manage to surprise me though ;)
What’s your idea of a perfect romantic evening?
Good food, good wine and my hubby.
What do you do to get in the mood for writing love scenes? Candles, music etc?
I don’t do anything special I just write.
Sometimes it’s really easy and the words flow, other times its hard work. If I really can’t get in the rhythm I make a couple of dot points about what the characters learn or how they change and I jump to the next scene. I usually go back the next day and fill in the gap. 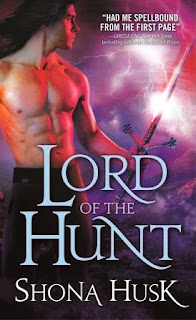 She Wasn’t Cut Out for His World...
The realm of the fairies might be unbelievably beautiful, but its people are notoriously treacherous. Raised among mortals, Taryn hoped to avoid her fairy heritage her whole life. But now she must cross over to Annwyn and appeal to the King to pardon her exiled parents, or they're sure to die. And to get to the King, she'll first have to face the Lord of the Hunt...


He Can't Imagine Life Without Her...
Verden, Lord of the Hunt, is sworn to serve to King. But the moment he sees Taryn, the attraction is instant and devastating. How can he not help the beautiful, brave young woman who refuses to bend to the will of the court? Yet the power in Annwyn is shifting, its magic failing. No matter how much he may love Taryn, the Hunter knows that abandoning his duty could bring down the mortal world forever...


ABOUT THE AUTHOR
Shona Husk lives in Western Australia at the edge of the Indian Ocean. Drawing on history, myth and imagination, she writes about heroes who are armed and dangerous but have a heart of gold—sometimes literally. She is the author of the Shadowlands Series and the Annwyn Series. You can find out more information about Shona and her edgy romances at http://www.shonahusk.com/ or follow her on Twitter, @ShonaHusk.