Hot Hump Day Excerpt - At Their Service by Isla Munro

Today's excerpt comes from Isla Munro's debut book "At Their Service." It is an intergalactic mmf take on the story of Cinderella.

“Oshan, we have exquisite taste in women. Sexy and funny. I love that neither of you treat me like a prince when we’re alone.”
“It’s hard to think of you that way when you’re so relaxed,” Drella pointed out as she melted into his embrace.
“It’s definitely hard when you’re around.” He placed her hand on his lap, allowing her to feel his erection through the leather kilt.
“Abran, don’t rush things.” Oshan’s voice was a plea.
Drella turned her head and boldly pressed a light kiss onto the valet’s mouth. She was beginning to enjoy herself and if she was honest, she could not wait to start exploring whatever was between them. “It’s OK. It’s just flirting.”
“It’s not.” Abran’s voice dropped, and he pressed her hand harder against his groin. Her pussy began to ache for the touch of both of these men. She moved her hand, and he offered no resistance. She leaned over to pick up her wine, taking a long, steadying draught.
“You need to be patient, Abran. And you need to share. This is a three-way arrangement and you are not calling the shots.” It was a warning, and Drella glanced quickly at Abran. His mouth twisted and he looked away—frustration marring his handsome face.
“I didn’t mean…I’m…fuck. I want you. I want to see Oshan lick your pussy. I want to fuck him as he fucks you. I want us to both be inside you at the same time. And I’ve wanted it since I saw you on your first day.” He stood up and pushed his hand through his long, dark hair.
Drella leaned over and kissed Oshan full on the lips. He opened his mouth, deepening the caress as he placed his hand on the back of her head to angle her properly. He delved deeper. Still immersed in the feel of his lips, she moved her leg over his thighs to straddle him. His hard cock nestled between them. Then there was another hard cock pressed against her back.
A pair of hands—Abran’s—cupped her breasts from behind. The warm, wet peck of his lips against her bare neck told her he was ready now and as needy as Oshan.
She pulled out of the kiss and leaned back. Turning her head, she caught the other man’s lips with her own. With no preliminaries, they were tongue-fucking. The new angle meant that her pussy rubbed against Oshan’s cock through layers of cloth and leather. But it still sent spears of pleasure through her.
Oshan pulled on the neckline of her top, exposing her breast, before he wrapped his lips around it and sucked. Abran continued to massage her other breast. Every nerve in her body was alive.
She ground into Oshan’s cock as he sucked harder on her nipple and swirled his tongue around it. She wanted to feel a cock in her hand or naked against her bare skin. She buried her hand under the flap of the prince’s kilt and took hold of the coveted flesh.
Abran held his breath and withdrew from the kiss, but she moved to capture his lips again, raising herself slightly off Oshan. The valet took his opportunity and tweaked the fastening of her shorts, burrowing his hand under the material until he touched her heated flesh. Strong, practiced fingers glided through her aching pussy, relieving some of the tension but sending desire coursing through her.
His touch was like a laser beam, finding the spots that made her groan and pressing them until he reached her core. He dipped his fingers into the entrance. She closed her eyes and waited for more. But Abran moved her onto her feet as Oshan withdrew his hand. His fingers glistened with her juices.
“Taste her,” he urged his master as he too rose to his feet. Abran sucked on his valet’s fingers and groaned his appreciation. Saints, the sight of that was nearly enough to make her climax. She could imagine the faint tickle of the prince’s tongue on the pad of her finger and the accompanying jolt of need that would no doubt follow.
“Like nectar,” he said eventually. Drella continued to slowly stroke Abran’s cock and buried her hand underneath Oshan’s kilt for the same purpose. The two men were kissing now, sharing the taste of her while they both tugged on her shorts to get them out of their way.

If you liked that, here's the blurb 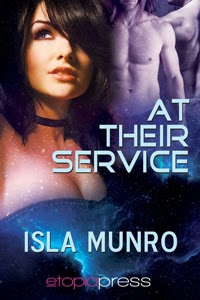 Can a prince, a maid, and a valet live happily ever after?

Forced to be a maid to her family, nursemaid to her birth-mother, and slave to her step-mother, the only high point in Drella’s life is a new job at the palace. She will get to meet the handsome Prince Abran. However, Drella is not expecting to be attracted to both the prince and his valet. The equally handsome Oshan invites Drella to enjoy a night of passion with both men...all three of them together. Can Drella put the messy relationship between her own four parents aside and accept the love offered by a prince and his valet?

Prince Abran is heir to the throne of Erotania. He loves his country and he loves his valet, Oshan. But his passionate relationship with the manservant cannot produce his own heir. In a culture where family groups consist of up to four bi-sexual adults and their offspring, it’s not much of a leap to bring a woman into their bed chamber. But what woman will be acceptable to his mother, attracted to both men, and willing to put up with his arrogance?

Oshan loves his master and knows he needs an heir. When Drella starts work in the palace, he can tell that Abran is attracted to the pretty maid. But Drella has her own challenges to face. Can Oshan and the man he loves discover Drella’s demons and help her fight them and can a prince, a valet and a maid defy the impossible and find their very own happily ever after?

US Amazon
UK Amazon
Barnes and Noble
ARomanceEbooks
at 07:00