Eager to escape her past in Ireland, Shauna Farrow signs on to become an indentured servant to Joshua Stewart, a wealthy man in Pennsylvania Colony.

But a life of servitude quickly turns to drudgery, and her hopes for starting over and creating a better life for herself are waning—until she meets her master’s roguish son, Ashton.

Shauna fights her growing attraction to Ashton, torn between propriety and acting on her emotions. But amidst their flirting, something dark stirs. Shauna soon discovers why no other servants will work for the strange Stewart family.

Stewart House has an unsavory reputation: a previous servant died there under mysterious circumstances. When another servant goes missing in the middle of the night, Shauna is convinced that a member of the family is responsible.

When Shauna’s investigation leads her too close to the truth, it’s up to Ashton to save her before time runs out.

When Lord James Eversley is accused of a murder he did not commit, he dresses up as his new brother-in-law’s footman and hitches a ride in their carriage out of town. When it seems they are no longer being followed he begins to relax until a minor accident causes them to stop at a shabby looking inn. As his “master” and his sister sip tea in the scruffy parlour, James comes face to face with Lady Anna, the woman who left him in the dead of night five years before and a familiar looking child.


Lady Anna has accepted her life as Mrs Johnstone, mother of four-year-old Viola, “wife” of Peter, the mentally ill former footman and land lady of a shabby inn on the Great North Road. Her plans for a love match with the handsome Lord Eversley were cruelly snatched away from her five years before. Her ruination means there is no opportunity to return to her family or the ton. When James turns up, dressed as a footman and demanding answers, Anna must decide whether to tell the truth.

James never stopped loving Anna and now he must learn what happened that fateful night that Anna left him heartbroken. With the truth out in the open, he must convince the love of his life to take a chance on him. He wants to marry her and restore her reputation among the aristocracy. But in Regency England reputations are easily lost and difficult to regain. Can Anna trust James enough to do what is right for Peter, despite his actions, her child and most importantly himself? Can James convince Anna to seek the help that Peter needs and return to the ton? 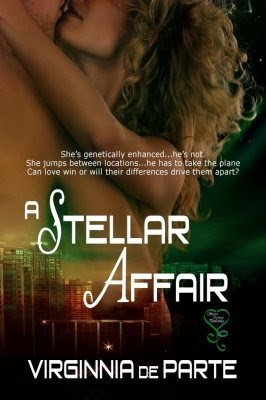 Stella Corban’s choice is hard - fall in love and endanger her genetically altered family, or lose the one man who makes her heart joyful. For three generations they have avoided the notice of the Department of Defense and its compulsory conscription, but Matt’s acquaintance with the Minister of Defense frightens Stella into avoiding any further contact with him.

Matt Saunders is not a man to be thwarted. He knows Stella is the woman he wants, and he pursues her from the outback to the city and beyond.

The battle between protecting her family and attaining her heart’s desire turns Stella’s world upside down. Would discovering her talents shatter Matt’s passion? Can he be relied on to keep a secret? Can she risk her safety and the whole family’s security by falling in love, or will a life-threatening event remove any choice she had?