What’s your name and where do you come from?
Charity Parkerson. I’m from Tennessee.
Tell us a bit about your latest release.
Aubree Holiday is obsessed with two sexy kickboxing instructors from her gym. After six months of fantasizing, the men offer Aubree a weekend-long opportunity she can’t resist. However, things aren’t exactly what they seem and once the men introduce her to current MMA Heavyweight Champion, Drew Alexander, Aubree has more to consider than ever before.
What’s your biggest turn on?
Confidence. For me, there is nothing sexier than a confident man.
Do you have a favourite character from your books? Why are they your favourite?
I do. Even though I shouldn’t play favourites and he hasn’t released yet, book three of the “No Rival” series will introduce Kurt. Book four, is his book. He’s intelligent, sexy and a step beyond naughty.
What’s your greatest weakness?
Coffee, chocolate, and sexy men…I’m not sure I can choose.
Tell us something that might surprise our readers.
I blush every time I write a sex scene since I’m actually pretty shy in person.
~~~~~~~~~~~~~~~~~ 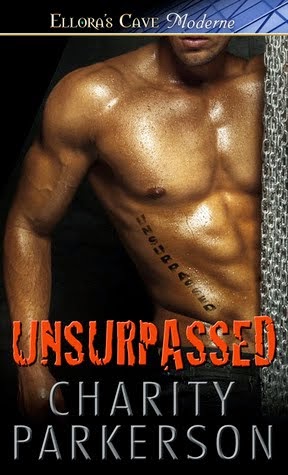 Book 1 in the No Rival series
Aubree is infatuated with two men, Max and Ryan. The two former Marines have been her close friends ever since she made her first misguided attempt at joining their kickboxing classes. When the pair invites her to join them at a weekend party thrown by Drew, a famous MMA champion, she has no idea what they have in mind. After spending one hot ménage night with the pair, Aubree learns the men’s intentions are not all about her. Feeling betrayed, Aubree turns to Drew who is also tugging at her heart. She must choose between the two men who have been the center of her fantasies, and the one man who could make all her dreams come true.
Inside Scoop: This sexy tale includes a ménage and male/male encounters that may leave you wishing for an alpha male fighter of your own.
A Romantica contemporary erotic romance from Ellora’s Cave

Bio:
Charity Parkerson is an award winning and multi-published author with Ellora's Cave Publishing, Midnight Books, and Punk & Sissy Publications. Born with no filter from her brain to her mouth, she decided to take this odd quirk and insert it in her characters. *2013 Readers' Favorite Award Winner*2013 Reviewers' Choice Award Winner*ARRA Finalist for Favorite Paranormal Romance*Five-time winner of The Mistress of the Darkpath