Em has asked that today's First Chapter Friday be three chapters long because they are so short.

Nathaniel Spencer, fourteenth Duke of Kirkbourne groaned and rolled over in bed. A tattoo beat a steady rhythm inside his skull, his stomach was bilious and the world spun at an alarming rate.
Last night he had been in his cups—again. He knew he should take a more moderate attitude to alcohol but recently, staying sober had seemed somewhat pointless. Why stay sober if you were just going to end up dead at the side of the road—another silly young buck who had killed himself in a curricle race?
Damn Crosby! Why had he made the damned challenge? Nathaniel, or Nate as he preferred to be called, would never forget Crosby’s lifeless eyes staring up at him, or the crack of the pistol as a bystander put his horses out of their misery. And he would never forgive himself for being the man whom Crosby was racing.
Nate closed his eyes and willed his stomach to stop churning as he tried to recall the events of the night before. He had been at White’s for dinner and had moved to the card room. The brandy had been flowing, and Ormsby had suggested moving on to a less reputable gaming hell. He remembered the Earl of Brackingham tagging along for some reason that defied Nate.
He had no issue with Brackingham, but the earl was at least twenty years the senior of everyone else in their party. He had been coughing somewhat alarmingly, Nate recalled. He hoped the old man was not spreading disease around. The last thing Nate needed was to be laid up in bed—his mother fussing around him and pouring vile-tasting concoctions down his throat. There was another thing that took many young, seemingly healthy lives—fever. Curricles and fever—good reasons to get absolutely foxed if ever he needed any.
Brackingham! The name seemed to be prodding his tired and very painful brain—waiting for him to remember something significant from last night. He had a vague memory of playing vingt et un with him. There had been a ludicrous bet. Brackingham wagered his daughter’s hand and if Nate lost, he would have to marry the girl.
Nate had been on a winning streak. Bravado and alcohol made him foolish. He had a three and a queen. He sat up as the king of diamonds flashed before his eyes.
God, damn it.
The king of diamonds took him to twenty-three. His head swum and he tamped down the urge to cast up his accounts. Twenty-three. But surely a wager like that was a joke. It had to be. Brackingham did not expect him to marry his chit of a daughter, did he? Had he even set eyes on the girl before?
Again, some piece of information about the girl needled his brain. He had no recollection of dancing with her at balls. But then he hardly ever danced at balls. He had no plans to seek a leg-shackle on the marriage mart, so he steered clear and spent most of the evening in the card room.
God, he hoped she was at least old enough to have had her come out and this was not some medieval plan to marry a thirteen-year-old off to him. Eighteen was quite young enough—too young in his rather jaded opinion.
But no. He had no recollection of ever having set eyes on Lady… Lady what? He had no idea.
He fished in the pocket of his waistcoat, which he still wore, having obviously been so foxed when he had returned that he had either shooed his valet away or he had arrived so late the valet had been asleep. There was a note. A wager. He hoped he owed the man a vast fortune instead.
Marry Lady Sarah Steele. Dowry - £10,000. Meet Brackingham on 5th day of March to make arrangements.
Today must be the fifth of March. Yesterday had definitely been the fourth. Christ, he had to see if this was a big joke or, if not, was there any way he could inveigle his way out of it. He had no plans to marry. None at all. And that was that.

“Pardon?” Sarah cried as her father stood in the doorway to her room.
“The Duke of Kirkbourne has agreed to marry you,” her father said petulantly, tugging at his cravat and thus proving that he knew he was in the wrong.
“Why would he? I have never set eyes on the man in my life.”
John Steele coughed. Once, twice and then it became a paroxysm of coughing. Goodness, she should not be shouting at him, no matter how ridiculous he was being.
He was not well. His skin was grey and waxen these days, and he had been fretting about who would care for her once the inevitable happened. But now he had somehow engineered for a duke to marry her. How could that have happened? Had it not occurred to her father to introduce them first, at the very least?
“I… umm, well that is to say… he is an honourable man, Sarah. I picked him out personally. He has been a bit overindulgent with the old sauce recently. A nasty business. He blames himself, of course, but marriage is just the thing to bring him out of the doldrums.”
“He drinks too much?” she asked, her brows furrowing as she wondered exactly what her father was getting her into. “How old is he?”
Her father waved his hand in a vague gesture. “Yes, he does drink but the man has his reasons. I do not know his age. A bit older than you, I suppose.”
A bit older. That could be anything between five and twenty and five and fifty. Perhaps she could look him up in Debrett’s.
But at that moment, she heard a knock on the front door.
“Oh, that will be Kirkbourne now. Wait here until I call for you. I shall meet with him in the drawing room rather than my study so you can join us.”
“Papa, does he know about my legs?”
“I assume so,” said her father as he left the room.
Hell. The man may not know he had agreed to wed a cripple. How dreadfully embarrassing. He may think her feeble-minded because her legs did not work. He could be a brute and her defences against him would be useless at best.
Well, she was just going to have to give him the opportunity to get out of the marriage. But then she would be left alone when her father died. And what would become of her? The earldom would revert to the crown and so would all entailed property. And there was not much besides the entailed estate.
She placed her crutches in front of her, and holding onto them with one hand, she used her other to lever herself out of her seat. Her room was on the ground floor. It had been her father’s study until her accident. He had moved his desk to her old bedchamber and her bed was now underneath dusty, empty shelves. But it was better than footmen carrying her up and down the stairs all the time.
She sighed. She was not willing to wait for her father to call her until she learned her fate. She had better face the Duke of Kirkbourne and let him see exactly what he had agreed to marry.


He rose and began to pace. He always thought better when he was on the move. 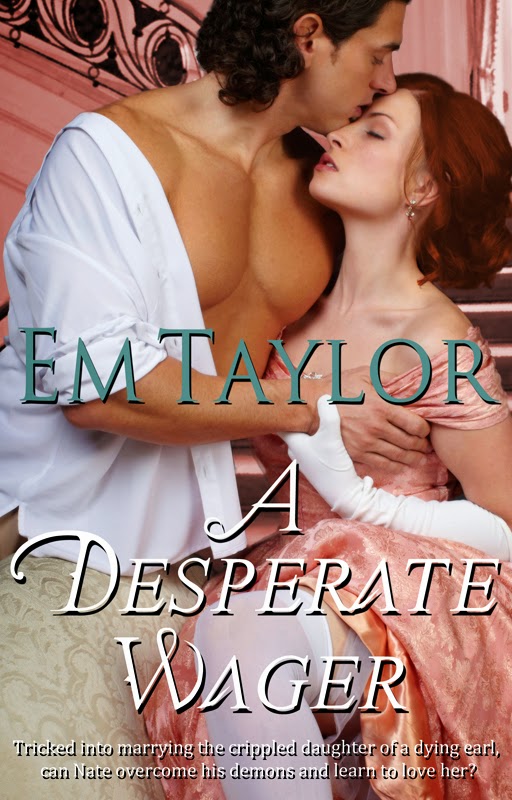