What’s your name and where do you come from?
I’m Ashley Ladd and I live in South Florida. I’m originally from South Florida.
Tell us a bit about your latest release.
Cooking Up A Storm is a contemporary male-male erotica. The heroes, Rique and Brooks, are competitors in a fierce cooking competition to land the head chef’s position for eccentric billionaire Jonah Verleun on his private Caribbean island. Each have their own reason for coveting the job, however, Rique’s could get them all killed.
How do you go about creating the perfect "Swoon" worthy man?
Even though I make each character different, at the core, they have to appeal to me. I’m attracted to men who are very self-confident, assured in their own sexuality, who have a swagger in their walk and a mischief glint in their eyes.
If you couldn’t be an author, what would your ideal career be?
I wanted to be an FBI agent and join a special task force like in Criminal Minds. After I left the Air Force I applied to the FBI. I had the qualifications since I was ex-military and had an MBA. Unfortunately, I’d also lost 90% of the hearing in my left ear while in the Air Force so that disqualified me. Working with the FBI would have been fascinating.
Do you have a favourite character from your books? Why are they your favourite?
I really like Haley from Purrfect Justice that is published by Ellora’s Cave. Like me, she wanted to be a kick-ass cop but physical limitations disqualified her (in her case poor vision). So she goes to work for the police department in an administrative role instead. While in costume for a Halloween party (so that nobody can tell her real identity), she hears that the cop she’s in love with is in trouble, and she saves his neck—and it becomes a habit. She’s a real person, yet very kick-ass and take-charge. I’d like to be her.
What’s the most romantic thing anyone has ever done for you?
A boyfriend took me to Biloxi Beach under the moonlight and proposed to me by playing hangman in the sand. I was supposed to guess the letters “Will you marry me?”
It would have been more romantic if I’d been in love with him. Unfortunately, I was still in love with someone else at the time and still pining for the other man.
Still, it was very romantic and very sweet. I just felt terrible that I hurt this young man’s feelings.
What do you do to unwind and relax?
I love to go to the movie theatre and watch movies on the big screen. I wish I could afford to go a lot more than I do.
What’s your greatest weakness?
I care too much what other people think of me. I really have to get over that.
What trait do you find the sexiest?
I love a deep, sexy voice—well-modulated, rich, even gravelly. I get chills just thinking about it.
I also want a man who can take care of himself and his family. I can’t stand a man who wants their lover to be a sugar momma. Unfortunately, I’ve seen that way too much in real life.
Is the stuff you write about from experience or mostly imagination?
Sexwise—mostly imagination. I’ve never been in a ménage and I’ve never watched a male-male coupling.
The rest of the stories are a mixture of imagination and things I’ve experienced or things people I know have experienced.
What’s your idea of a perfect romantic evening?
I love moonlight and I love water. Thus I love going to the beach or the pool under the moonlight. If we were to have champagne to sip and soft, romantic music playing, all the better.
What do you do to get in the mood for writing love scenes? Candles, music etc?
I listen to romantic ballads—especially by Harry Connick Jr., Frank Sinatra, and the late 70’s tunes. I was a teenager falling in love in the late 70’s so those songs hold special meaning to me.
Although I would love to light candles, I have kids and cats. We had a big fire once because our son knocked over a candle. Luckily we survived because neighbours saw the flames, woke us up, and got us out of the house. But I haven’t lit a candle in my house ever since.
What do you do when you’re not writing?
Hanging out with my adult kids and my friends. We go out to eat, to the movies, to the pool, to the beach, shopping, etc. Forty plus hours of my week is spent at the day job. Then I come home and either write or do promotional activities for my writing most every evening and weekend. Thus I’m working in one form or the other most of the time.
Tell us something that might surprise our readers.
I joined the Air Force to see the world. I was only stationed stateside, in Texas, Nebraska, and Mississippi.
~~~~~~~~~~~~~ 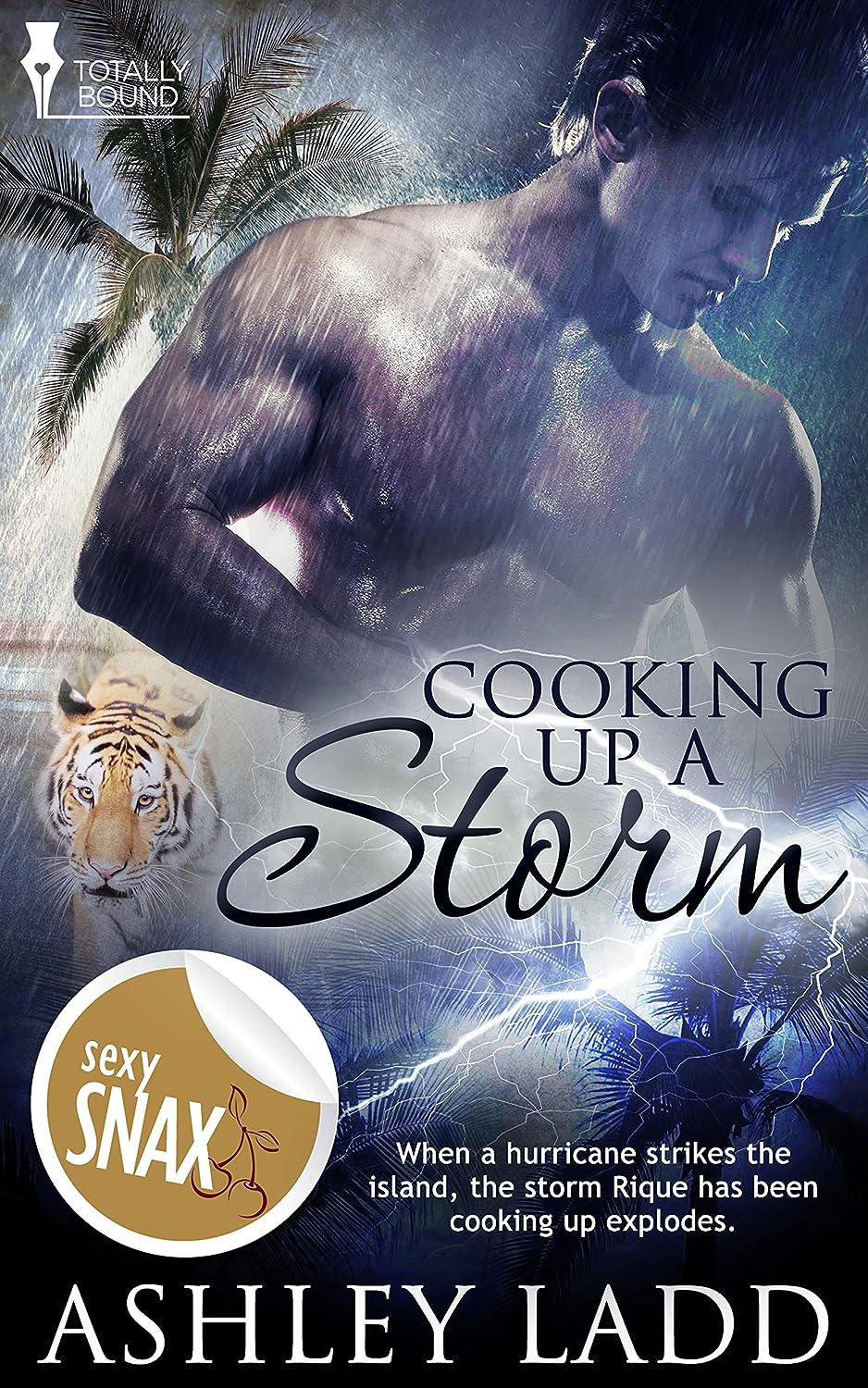 
Brooks and Rique desperately want to win the head chef’s position offered by an eccentric millionaire Jonah Verleun on his beautiful, private but peculiar island that includes a zoo full of exotic animals, an amusement park and a monster shark tank beneath Jonah’s bedroom floor. While Brooks wants the job to escape his heartache and the lover who thwarted him, Rique is hiding from the mob, hoping to live long enough to pay them off with the prize winnings. Fierce competitors, they cook up a storm in a series of cooking challenges while trying to turn down the heat on their intense attraction. When a hurricane strikes the island, the storm Rique has been cooking up explodes, and no heart—or body—is safe.

Ashley Ladd lives in South Florida with her husband, five children, and beloved pets. She loves the water, animals (especially cats), and playing on the computer.


She's been told she has a wicked sense of humour and often incorporates humour and adventure into her books. She also adores very spicy romance, which she weaves into her stories.
You can find Ashley at: