Blog Tour and Giveaway: This Heart of Mine by Brenda Novak 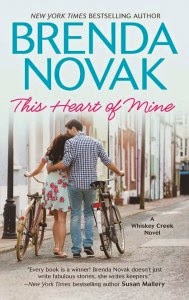 As the daughter of a hoarder, Phoenix Fuller had a tough childhood. So when the handsome, popular Riley Stinson became her boyfriend in high school, she finally felt as though she had something to be proud of. Phoenix was desperate not to lose him—especially once she found out she was pregnant. Yes, she might have acted a bit obsessive when he broke up with her. But she did not run down the girl he started dating next.

Unfortunately, there was no way to prove her innocence. Now, after serving her time in prison, Phoenix has been released. All she wants to do is return to Whiskey Creek and get to know her son. But Jacob’s father isn’t exactly welcoming.

Riley doesn’t trust Phoenix, doesn’t want her in Jacob’s life. He is, however, ready to find someone to love. And he wants a good mother for his son. He has no idea that he’s about to find both!
~~~~~~~~~~~~~

Once again, Phoenix’s eyes were riveted on her son. Only this time, she felt such a surge of emotion she almost darted into the bathroom. She could not break down.

Please, God, don’t let me cry. He won’t come within ten feet of me if I do.

But the harder she tried to hold back her tears, the more overwhelmed she became. In a panic, she slipped around the corner, into the small alcove by the bathrooms, and leaned her head against the wall.

The bell over the door jingled, telling her that Riley and Jacob had stepped inside. She imagined them looking around, maybe getting annoyed when they didn’t find her. But she was frozen in place. She absolutely could. Not. Move.

“Hey,” she heard the hostess say with a familiarity that hadn’t been present in her greeting to Phoenix. “We’re busy this morning, like we are every Saturday. But if you can wait for a few minutes, I’ll get you a table.”

“We’re actually meeting someone who should be here.”

That had to be Riley, but Phoenix couldn’t say she recognized his voice. Her memories of him were vivid. But they’d both been so young, and he’d changed a great deal. No longer the skinny teenager she’d known in high school, he was a man with plenty of hard muscle on his solid frame, a man in his prime, and that had been more than apparent as she’d watched him walk, shoulder to shoulder, with their son a few seconds earlier.

“Who are you here to meet?” the hostess asked.

“I’m not sure these days,” he said, and Phoenix winced. Her shoulder-length dark hair wasn’t bad. It was thick, probably her best asset. Her hazel eyes weren’t unattractive, either. She didn’t feel she was ugly. But the scars on her face would be new to him. She hadn’t had those when she went to prison.

“She wasn’t very tall,” he added, as if that might be the only detail still applicable.

“There was a woman who said she was expecting two more to join her,” the hostess said. “But I don’t know where she went…”

Determined not to miss this opportunity after waiting so long for it, Phoenix curved her fingernails into her palms, took a deep breath and stepped around the corner. “Sorry I…I had to wash my hands.”

New York Times & USA Today Bestselling Author Brenda Novak is the author of fifty books. A four-time Rita nominee, she has won many awards, including the National Reader’s Choice, the Bookseller’s Best, the Book Buyer’s Best, the Daphne, and the Holt Medallion. She also runs Brenda Novak for the Cure, a charity to raise money for diabetes research (her youngest son has this disease). To date, she’s raised $2.4 million. For more about Brenda, please visit www.brendanovak.com.