Phone Sex
“God, Dylan, it’s so good to hear your voice.” Gina poured a second helping of red wine into her glass.
Dylan laughed. “That bad, huh?”
In her ear, Gina adjusted the hands-free device, a priceless business accessory without a doubt. “Not bad really.” She sighed, setting the Merlot bottle to the side, “Just an extremely long day.”
For several hours that day, Gina paraded in five-inch heels and talked to several dozen would-be customers. Now her voice was gone, her cheeks hurt from a forced smile and to complicate matters, a throb settled at the back of her neck.
“But...” She paused, and sipped the woodsy flavored red. “On the upswing of things, we managed to secure two meetings for this Thursday.”
“Two meetings? That’s great,” Dylan said with genuine enthusiasm in his voice. “Possible clients you think?”
“Well, they sound interested.” Gina discarded her heels, chucking them next to the love seat. “Marc did most of the talking this time.” Her toes grasped the rich thick carpeting below, it was good to stretch her tired achy feet.
“So Marc’s playing nice, then?” Dylan said with a slight change in his tone. Was it sarcasm? Perhaps. Or perhaps Gina’s fatigue caused her to over analyze things.
“I guess you can say he’s playing nice.” She sipped again this time a more liberal drink.
“I don’t know why you keep him on staff,” Dylan muttered in her ear. “Marc is difficult.” He paused a moment. “You know damned well there’s no guarantee he’ll have the same attitude tomorrow and the day after that.”
Definitely sarcasm. “Marc is not a bad guy, Dylan.” Gina ambled to the window and parted the curtains.
“You insist on making excuses for him.”
The sunset in Boston tinted the gray skies pinkish at the horizon, and from her twelfth story hotel suite, the view captivated to say the least.
“I’m not making excuses. Mark’s just temperamental.”Temperamental was a pleasant way to describe him.
“You’re doing it again.”
Gina didn’t want to argue with Dylan, but she needed to defend her stance. “Doing what?”
“Sugar coating,” Dylan snapped. “Marc is an asshole, plain and simple.”
Gina perched against a large decorative hallway table and stared at the spectacular view of the Charles River. “Don’t you think that’s a little harsh?”
“No.” Dylan was direct. “I don’t think I’m being harsh at all, and deep down inside, neither do you Gina.”
Okay, so Marc Leon was complicated, but during the course of a year Gina learned to deal with the man’s moodiness.
“I hired Marc, because he’s competent and happens to be good at what he does,” Gina said. “Not for his amiable qualities.”
Marc’s attitude needed adjustment at times, but Gina opted not to tackle that particular subject and especially not with Dylan over the phone.
“What I meant is Marc appears more even-tempered.” She chewed on her bottom lip, “It kind of makes me wonder about him.”
Gina attributed Marc’s cordial behavior to a significant other, but whatever it was, it came at the most opportune time. With the conference and two new clients, their advertising department needed to be at the top of their game.
A chuckle came from the other end of the line. “Yeah, it kind of makes me wonder about him, too.”
Good grief Dylan was on a rant. For a moment, Gina wondered what possessed her to bring up the subject of Marc in the first place. She swallowed a generous serving of her wine, allowing the warmth of the California vintage to diminish her concern. Unless she managed to assuage her feelings, the day’s stress, her headache, and her own hostility would give way to surliness.
“Perhaps Marc is acting gracious because he has ulterior motives,” Dylan suggested in a sarcastic tone.
Gina closed the curtains and pushed away from the table. “Ulterior motives,” she repeated. “What ulterior motives?”
“Well, getting in bed with you is one of them,” Dylan said matter-of-factly, “Have you considered that angle?”
Stumped, Gina choked on her wine. Dylan’s blunt and direct comment surprised her. She mulled over his tongue-in-cheek remark for a few seconds before responding.
“No, I hadn’t considered that actually,” she said, dabbing her lips with a cloth napkin. “May I add how bizarre a theory that is?”
“It’s not so odd, you know,” Dylan explained, “Boss-employee infatuation.”
Office liaisons, in modern day society, were more a trend than the exception, and Gina knew this. Nevertheless, Dylan’s comment defied common sense.
“Did you by chance forget that Marc is gay?”
A husky chortle rumbled in Dylan’s throat. “I didn’t forget,” he said. “I suspect Marc is not being a hundred percent truthful about his sexuality.”
Gina held back a laugh. “Are you serious right now?” She set her wine glass on the table behind. “You’re telling me that you believe Marc is faking being gay?” That was an outlandish thing to say.
“No,” Dylan responded. “What I’m saying is that Marc’s not just gay.”
Not just gay? “Oh for heaven’s sake Dylan, just spell it out?” Gina’s spit out in frustration.
“I think Marc is bisexual.” 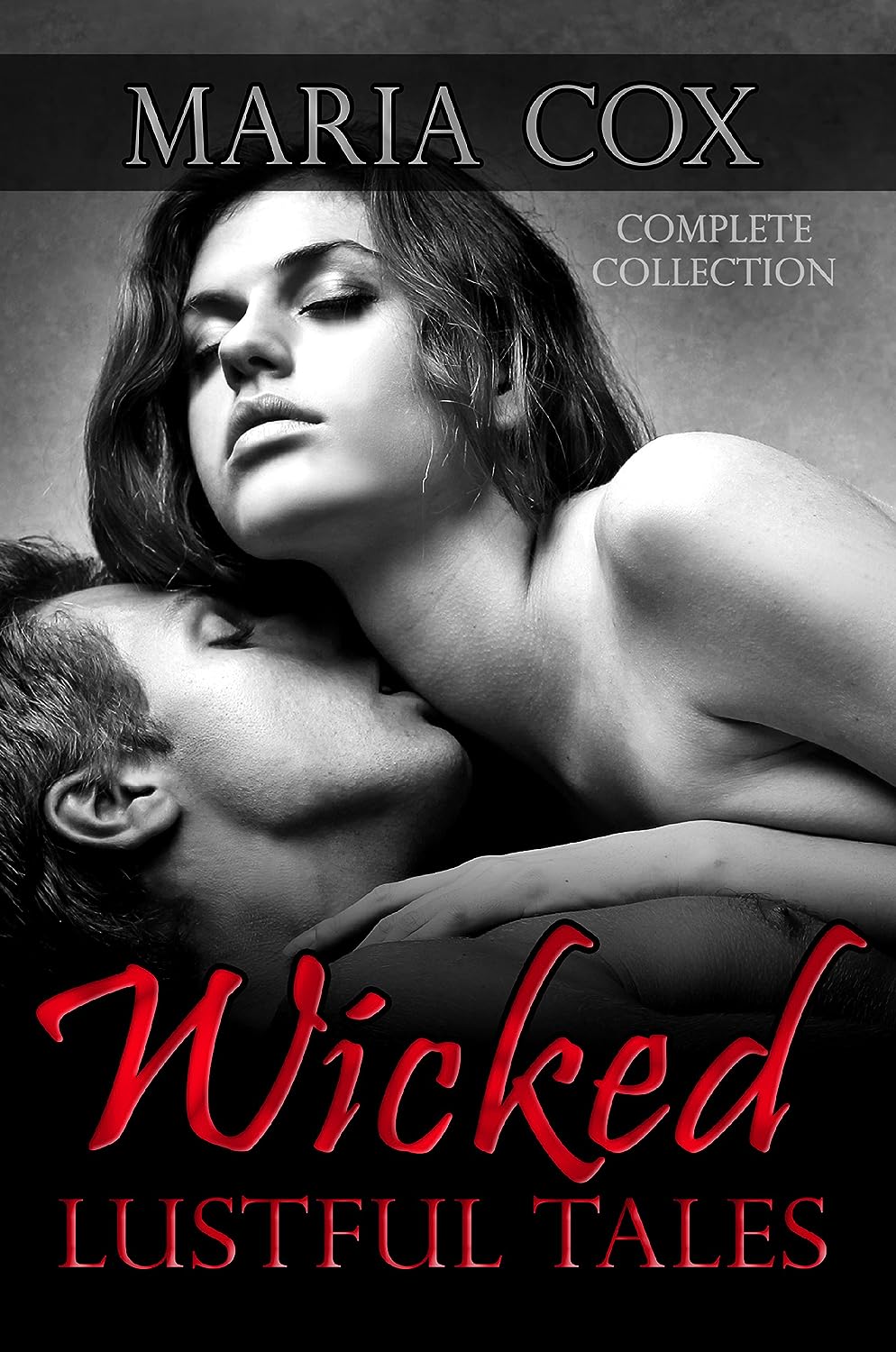 Wicked Lustful Tales is a compilation of stories that blend, drama, friendship and most certainly steamy romance.

Stranded
During a group cycling vacation in the Caribbean Shana White learns that her boyfriend is moving to New York to further his career without her. With no intention of sulking Shana opts for a day excursion with former beau and fellow cyclist Nick Marino. After a biking accident leaves them stranded the rekindling of an old friendship and memories of their torrid past emerge leaving Shana to struggle with conflicting emotions. Now on the rebound can she afford to seek solace in Nick’s arms and risk heartache all over again?

The Charity Event
With a career in photography about to take off Adam Baxter is at the top of his game. Office buddy Jennifer Silva has been a supportive friend from the start and the two have an easygoing platonic relationship. But when Adam’s assistant Nellie singles out Adam’s jealous behavior he’s forced to analyze his true feelings for beautiful, caring Jennifer. Adam knows all too well that a romantic involvement can complicate matters. So, is Adam ready to put it all on the line and take their friendship to the next level?

Snowed In
When Nina Bates discloses her pregnancy she’s soon shunned by her boyfriend and her mother. Alone and confused Nina turns to her grandmother who suggests she leave her hometown of Seattle and move to Alaska. In Anchorage, divorcee Dexter McIver hires Nina as live-in nanny to his son. An emotional bond develops between them and after Nina delivers her baby the smoldering attraction that existed for months threatens to boil over. With so much at stake should Nina and Dexter go out on a limb for a brief liaison?

Phone Sex
Advertising executive Gina Blanchard has her hands full with not only a busy conference schedule, but a difficult employee too. Fatigued, she calls her boyfriend Dylan Jessup. He encourages Gina to unwind and experiment with a one of a kind sexual experience.

Summer Love
Bryn Banks, a city girl at heart, travels to North Dakota for a summer program in rural Coleharbor, North Dakota. There, she works with biologist Kyle Norman, a small town guy. As they work closely together, the relationship becomes intimate. When the summer draws to a close, Bryn urges Kyle to come with her, but he resists.

Married and in Lust
After three weeks on the road, professional hockey player Ethan Lewis returns home for Thanksgiving. When he sees another man approach his wife Whitney as she waits for him, jealousy and desire take over. Ethan conjures a wild intimate encounter but is he able to persuade a reluctant Whitney to take part?