Blog Tour and Giveaway: Shifted Under Construction by C.E. Black

Bedroom eyes and rock hard abs make for yummy eye candy, but Harper Mattox knows a bad boy when she sees him. She’s been there, done that, and refuses to buy the T-shirt. The scar was enough of a souvenir.
When Harper agrees to be the temporary secretary at H&V Construction as a favor to her best friends’ husband, Adam Hughes, she thought her days would be spent behind the desk, organizing until her heart was content. She had no idea she’d have to put up with the walking sex-on-a-stick Christian Viera. AKA, her other boss. No matter how many times she turned him down, he just oozed more charm in her direction, weakening her knees, as well as her resolve. And it was only her first day!
A threat on Harper’s life has Chris ready and willing to protect her, showing off an animalistic side she never knew existed. She’s known violence in her past and has no room for it in her life now. Is the fiery passion between them enough to stick it out? Can she accept him? Fur, claws, fangs, and all?

“How ’bout I give you that tour. Grab a hat.” He jerked his chin toward the row of bright yellow hard hats hanging on the wall.
Holding open the door for me, he waited as I glanced back at Adam to find him sitting comfortably on the edge of my desk, smiling as he whispered into the phone. Shaking my head, I followed Chris out of the trailer and into the warm sunlight. I would have rather waited for Adam. There was something about Chris that made me uncomfortable. He was dangerous, for sure, but I didn’t believe he’d hurt me. Physically, at least.  He was one of my bosses though, so it was best to go along.
“So,” he began as we walked. “You’re friends with Nikki?”
“Since grade school.”
“You weren’t at the wedding. I would have remembered seeing someone as beautiful as you.”
When my steps faltered, he reached out to grip my elbow so I wouldn’t fall. “Thanks.” I shook my head and pulled my arm away.
Clumsy much, Harper? It was just a compliment. A fake one at that. “You’re a charmer, aren’t you?”
“Maybe. But everything I say is a hundred percent true.” He grinned when I rolled my eyes. “So, why weren’t you at the wedding?”
“Personal reasons.”
“Falling out between friends? Did you steal Nikki’s boyfriend or eat all her chocolate or something?”
“What? No.” I shook my head. “There was a family emergency.”
“Oh, sorry. Everything okay?”
I ran a finger over the line of raised skin just under my ear and shivered at the memory it produced. “It is now,” I whispered.
His brows furrowed as he looked down at me with concern. “Want to elaborate?”
“No, I don’t.”
“Fair enough.” He nodded and turned away. “Let’s get this tour over with. We both have work to do.” His tone was clipped, but the tension in my shoulders eased.
“Hey!” Adam yelled. “I said I would give her the tour.” He gave Chris a pointed look as he caught up to us.
“It’s no problem, ” Chris snapped, coming toe-to-toe with Adam.
I looked back and forth, watching as they stared one another down. Eventually, Chris nodded, and without another word to me, walked back toward the trailer.
“Sorry about that.” Adam motioned for me to walk with him. “I have to warn you, Chris is a great guy, but he’s a bit of a player. I’m warning you now, he’ll try hitting on you. It’s best not to go there.”
“You have nothing to fear,” I assured him with a smile. “I have no interest at all.”
“Good.” He sighed. “I mean, he’s my best friend. And I don’t want you to think badly of him. He really is a nice guy. But you and Nikki are close. I feel like I should give you a little warning. Relationships aren’t Chris’ strong suit.”
I held up a hand. “No need to explain. I get it. And, like I said, you have nothing to worry about. He’s not even close to being my type.” I smiled as the lie slipped easily from my lips. He was exactly my type, but I decided months before to change what I found attractive. No more bad boys. Boring, safe, and sweet were now at the top of my list. 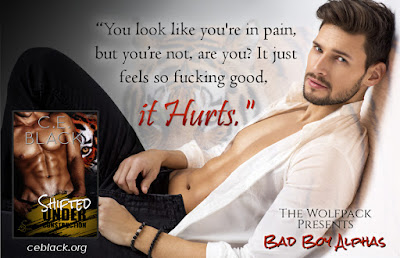 C.E. Black self-published her first book in 2011 and has since published several novels, novellas, and short stories. Though she began her writing career in the Paranormal Romance genre, she found her niche in erotic PNR/Fantasy with her breakout novel, Shifted Temptations. What started out as a standalone romance, became the Amazon best selling Alpha Division series. Though steamy romance, hunky heroes, and feisty heroines are C.E.'s specialty, she enjoys surprising her readers with action-filled plots and exciting twists that makes for a fast-paced read.
For information on her novels and other works, visit www.ceblack.org, and grab your FREE download of her bestselling novel, Shifted Temptations.

Free for a limited time!

Free when you sign up for C.E. Black's Newsletter!

a Rafflecopter giveaway
at 11:00