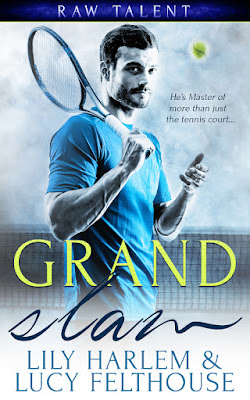 *****
Blurb:
California had seduced me with promises of a new life working at Los Carlos Tennis Academy. What I didn’t expect was the dark, brooding number one seed, Travis Connolly, resisting my help. He wasn’t interested in my psychology skills. Instead his attention was drawn to the edgy, sharper corners of my desires, proving that they existed, setting me challenges and driving me crazy to the point of combustion.


I’m the best tennis player in the world—officially—so why would I need a damn woman full of psychobabble to get me on form? Despite my irritation, however, I can’t resist pushing Marie Sherratt’s buttons even though doing that shows her the darkest shades of my lust, the parts of me I buried deep. So I set her a challenge, one she rises to, one that has me rising too, and before long my game relies on her calling the shots, hitting the target and bending to my will. One thing was certain, being not just master of the court, but also of Marie is seriously good for my soul.


Add to Goodreads: http://www.goodreads.com/book/show/18212109-grand-slam
More sports romances from Lily Harlem & Lucy Felthouse: http://www.rawtalentseries.co.uk
*****
Excerpt:
I turned to the door. I always kept it ajar when expecting a client, to give the impression that I was open to whatever they needed to talk about. It was a subliminal thing.


Travis stood in the frame, his wide shoulders filling the space, the top of his head almost brushing the wood and his jawline holding a heavy sprinkle of black stubble.


Fuck, he should come with a warning. Hazard to the health of every female heart. He looked good enough to eat, or lick all over at the very least. Tasty.


“Knock, knock,” he said, slipping his gaze down my body.


“Come in. Take a seat.” I gestured to the couch and made a point of not letting my attention slide over his body. I didn’t need to look at soft blue jeans worn in all the right places or at his black polo top with a Nike logo just over his right nipple to imagine what was beneath them. I took a deep breath to stop myself doing just that. His physical attributes weren’t my concern, it was his mind I was after.


He shut the door and sat sideways on the low S curve of the black leather recliner, his long legs folding over and his knees coming up high.


“Please,” I said. “Lie back, make yourself comfortable.” I took a seat on a soft chair just to his left and crossed my legs.


Damn, I hadn’t realized how short this tight little red skirt was. Quickly I uncrossed, then started to worry there was a gap between my knees that would flash the top of my stockings or worse, what was between them. Hurriedly I pressed my notebook over my lap, resisted a squirm and forced a gentle smile at Travis.


“Contacts usually.” I touched the black frames and pressed them up the bridge of my nose a fraction.


“You were in a hurry this morning then?” He frowned, as though irritated by me being in a hurry.


“Not especially, it’s just the heat and being tired, it’s made my eyes a little sensitive. I thought it best to opt for my glasses when I left home this morning.”


“So you slept at home last night?”


“Pardon?” I creased my brow in confusion.


His fists were clenched and a muscle twitched in his jawline. “You slept at home then and not at…?”


I struggled to keep the surprise out of my expression. Bloody hell, was he getting at what I thought he was? Did he want to know if I’d slept at Peter’s?


His dark eyes were boring into me; they were deep chocolate-brown, almost black. Annoyance swirled in their depths, so did a curious certainty that I’d answer his question. He was definitely a man who was used to getting what he wanted.


Well, I supposed he would again now, because if he didn’t chill out we’d get nowhere and I had things to start work on. Plus I hadn’t slept with Peter. I wasn’t a to-bed-on-the-first-date kind of woman, so what was the harm in being truthful? “Yes, I slept at home last night.” I opened my notepad, clicked the spring on my ball-point pen and tilted my chin. “Alone.” I caught his steady gaze. Yes, I’d told him something he had no right to wonder about. But by telling Travis what he appeared to want to know, he owed me something in the confessing stakes.


He nodded slowly, then lifted his legs and did as I’d asked, lay back on the chair and settled his gaze over the L.A. skyline.


“And what about you?” I asked, watching as he unfurled his fists and rested his hands over his flat belly. “Did you sleep alone?”


“Yes. I did. But you could have been heading out to meet someone or catching up with other players. I’m not a mind-reader.”


I waited for him to elaborate on our chance encounter or offer some information on the rest of his evening. He didn’t.


“In these sessions, Travis, it’s important for me to know who else is in your life, who you hang out with, who you share your thoughts and feelings with.”


“You have everything you need to know in my file.”


“Your file is full of facts. I’m more interested in the non-tangible things.”


He sucked in a breath, rolled his lips in on themselves and stared out the window.


“Have you left someone you care about back in England?” I asked gently.


“I think this is all very much beyond the realms of what we’re supposed to be doing here.” He’d fisted his fingers again and shifted his right foot irritably, as though kicking something away. I wondered if he was imagining it was my head.


“It’s up to us to decide what we want to do with our time together, Travis. We can talk about your accident or cognitive methods for keeping calm and focused under pressure, or you can unload all the stuff that fills your mind and stops you from being able to concentrate on court. Entirely up to you.”


“Great, in that case we won’t discuss my love life. It really is the last thing that plays on my mind when I’m beating an opponent into submission.”


Okay, now was the time to play my trump card. “Yet you feel it necessary to ask me about my love life.”


“No, I didn’t, but you wanted to know, and since we’re stuck with each other for three hours a week for the foreseeable future I figured it would make sense for us to know a little about each other’s lives.”


“So now we do. I know you’re dating my coach and he wants to get into your knickers, and you know I sleep alone and have done for a long time now.” He paused. “Too long.”
Great, now we were getting somewhere. “And would you like that to change?”


He sighed and shoved his hand through his hair. I watched the black strands feather through his fingers and an image of myself doing that to him as he kissed down my sternum, onto my stomach, lower, suddenly stole into my mind.


I tightened my legs together. Felt a pleasurable little rush of heat in my lower abdomen. No. That was a ridiculous thing to daydream about. Travis Connolly was not only way out of my league, he was also a surly grump. Sitting here talking to him was stretching seconds into minutes.


“Are you asking me if I want to get married?” he asked, his gaze slipping to my chest.
Damn it, my nipples were tingling now.


“No, not at all. Simply wondering if you feel your career allows you to have a romantic relationship or if it’s something you’ve sacrificed in the name of tennis.”


“I’ve sacrificed lots of things to be number one seed.”
*****
About Lily Harlem
Lily Harlem lives in the UK and is an award-winning author of erotic romance. She writes for publishers on both sides of the Atlantic including HarperCollins, Totally Bound, Pride Publishing, Evernight Publishing, All Romance eBooks, Stormy Nights Publishing, Tirgearr and Sweetmeats Press. Her work regularly receives high praise and industry nominations.
Before turning her hand to writing Lily Harlem worked as a trauma nurse and her latest HarperCollins release, Confessions of a Naughty Night Nurse draws on her many experiences while nursing in London. Lily also self-publishes and The Silk Tie, The Glass Knot and Scored have been blessed with many 5* reviews since their release.


Lily writes MF, MM and ménage a trois, her books regularly hit the #1 spot on Amazon Best Seller lists and Breathe You In was named a USA Today Reviewer’s Recommended Read of 2014. Her latest MM novel is Dark Warrior.


Lily also co-authors with Natalie Dae and publishes under the name Harlem Dae - check out the Sexy as Hell Trilogy - The Novice, The Player, and The Vixen - and That Filthy Book which has been hailed as a novel 'every woman should read' and is available in book stores nationwide.


One thing you can be sure of, whatever book you pick up by Ms Harlem, is it will be wildly romantic and down-and-dirty sexy. Enjoy!


Check out Lily’s website for details of her other books. Subscribe to her newsletter to get a FREE ebook and be the first to hear of new releases and free reads, and if you enjoy Facebook, hop on over there and say hi!