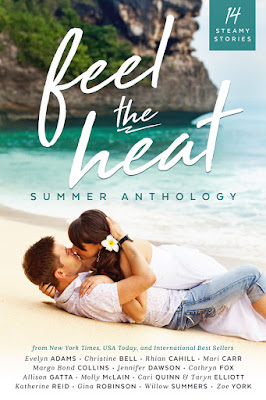 Sexy summer stories from 15 New York Times, USA Today, and International Bestselling Authors...
Wanted by Evelyn Adams
An unexpected island adventure is the perfect opportunity to reignite the fire between them...
Over It by Christine Bell
When a once in a lifetime Spring Break trip brings them face to face again, she can’t help trying to exact a little revenge...
Singapore Fling by Rhian Cahill
Carly has lusted after her boss for months and while on a business trip to Singapore she throws caution to the wind and suggests a fling. But he isn’t the conservative businessman she expected...
Mad About Meg by Mari Carr
She’d never been lucky in love…until she met him. But will one weekend in each other's arms be enough?
Beach Blanket Bridesmaid by Margo Bond Collins
All Ava wants is one wild island fling with her older brother's best friend... But she may have to choose between right now and forever.
The Walk of Shame by Jennifer Dawson
What better way to find yourself than with a vow of celibacy and a trip to Belize?
What could go wrong…
Yours to Take by Cathryn Fox
Can she put herself in the hands of the commanding man who promises to give her everything she's ever wanted in exchange for total and utter submission?
Playing Doctor by Allison Gatta
When a fiery redhead practically falls into his lap, it’s all he can do to control his anything-but-hands-off urges.
Can't Hold Back by Molly McLain
Will her secret desires bring an early end to their happily ever after?
Rock, Rattle, & Roll by Taryn Elliott and Cari Quinn
A beachfront cottage, hours of alone time, and plenty of skin on skin action is just what the rock star ordered. Until the future once again comes much quicker than they expected...
Billionaire Beach Bum by Katherine Reid
Hayley and Logan must rely on each other to survive. And Logan will protect the woman he loves--no matter the cost.
The Billionaire's Beach House by Gina Robinson
Stranded in paradise.
As a storm brews on the horizon, the question is—will it make land?
Ship Wrecked by Willow Summers
This weekend was supposed to be about work. I was supposed to ward off men with my snarly attitude.
But then, who could say no to that smile…
Cherished by the SEAL by Zoe York
A hot bride, an island honeymoon, and a suitcase full of bikinis. So what if he’s not the groom?