Book Spotlight and freebie: Arms of Danger by Kaiden Klein 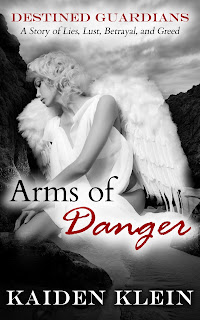 After having been granted a second chance following her untimely demise in her former life, Helena has dedicated herself to protecting humans. Haunted by revelations from her past life, Helena is torn between the life she’s dedicated herself to and to those she left behind. Her dedication to humankind has afforded her the opportunity to learn a great deal about the evil that exists in the world, but nothing could prepare her for the newest threat.
Betrayed by Barak, the leading commander of their municipal’s army, Helena must defend the community against the new bloods, treacherous vampires, bent on overthrowing the king and taking control of the monarch. But doing so will not come without risk, especially since she’s sleeping with the enemy who knows her deepest secrets.
A future of violence and enslavement gets closer and closer to becoming a reality in the presently peaceful town.
With the threat growing, Helena finds herself facing a different challenge. The promise of love enters her life, but in order to fully embrace it, she must save the people of Wyden first.
Will Helena be able to save the ones she’s dedicated her life to protecting or will greed win by using her secrets against her?
This is a story of greed, lies, lust, and betrayal.