Book Spotlight: Setting Fire to the Darkness by J.M. Pozon 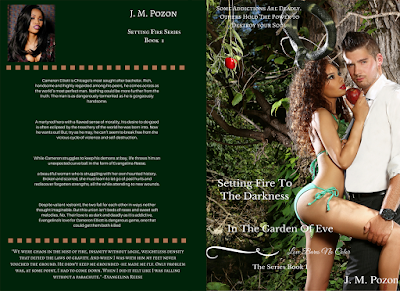 It, was something about knowing how rough he could get, but experiencing how gentle he remained with me. And, although I loved him as a gentleman, I'd be damn if I didn't crave him as a Savage.- Evangelina Reese

Cameron Elliott is Chicago’s most sought after bachelor. Rich, handsome and highly regarded among his peers, he comes across as the world’s most perfect man. Nothing could be more further from the truth. The man is as dangerously tormented as he is gorgeously handsome.

A martyred hero with a flawed sense of morality, his desire to do good is often eclipsed by the treachery of the world he was born into. Now he wants out! But, try as he may, he can’t seem to break free from the vicious cycle of violence and self-destruction.

While Cameron struggles to keep his demons at bay, life throws him an unexpected curve ball in the form of Evangelina Reese,
a beautiful woman who is struggling with her own haunted history. Broken and scarred, she must learn to let go of past hurts and rediscover forgotten strengths, all the while attending to new wounds.

Despite valiant restraint, the two fall for each other in ways neither thought imaginable. But this union isn’t beds of roses and sweet soft melodies. No. Their love is as dark and deadly as it is addictive. Evangelina's love for Cameron Elliott is dangerous game, one that could get them both killed.