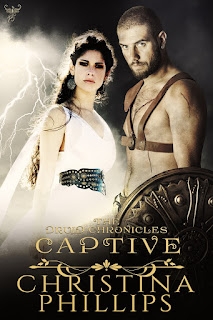 A Druid priestess falls for the wrong man – the warrior who’s taken her prisoner…
Hungry for revenge, Druid acolyte Morwyn turns her back on her goddess and vows to fight the Roman invaders. But before she can join up with the rebels, she’s captured by a tough Gaul mercenary.
Bren, pledged to the true Briton king, has spent three years undercover in the Roman Legion. When his own unit attacks a fiery Celtic beauty, he saves her the only way he can – by claiming her as his prisoner. He knows he can’t trust her but, as her icy disdain thaws, her quick wit and infectious laugh lighten his blackened soul and he craves for the chance of a normal life–with her.
Infuriated yet intrigued by her captor, Morwyn can’t help falling for his gruff charms and rare smile. He’s her enemy but he has honor and the longer they’re together the less she believes in his brutal reputation. He’s her Gaul, and in the black of night, in his arms, she dreams of a future together.
But the wrath of a spurned goddess echoes through the land and Morwyn and Bren need to overcome their past, put their trust in each other and face their deepest fears for the chance to survive in a fractured world.
Previously published by Penguin US in 2011 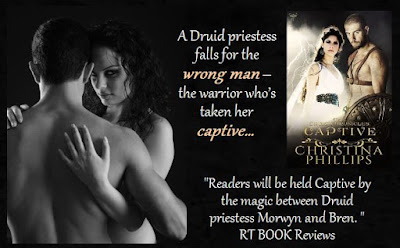 
Captive is the second book in The Druid Chronicles, with sexy alpha warriors and their mystical Druid heroines.


Bio
Christina Phillips is an ex-pat Brit who now lives in sunny Western Australia with her high school sweetheart and their family. She enjoys writing contemporary, historical and paranormal romance where the stories sizzle and the heroine brings her hero to his knees.
She is addicted to good coffee, expensive chocolate and bad boy heroes. She is also owned by three gorgeous cats who are convinced the universe revolves around their needs. They are not wrong.