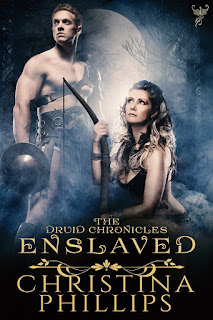 When a Druid priestess falls for her Roman captor she’s torn between her duty to her goddess and her love for the enemy…
When Druid priestess Nimue is injured and enslaved by the hated Roman Legion she’s determined to escape and complete her covert mission for her beloved goddess, to eradicate the invaders from her land.
But the tough warrior who captures her is far from the brutal barbarian she expects. Instead, Tacitus turns all her prejudices inside out, and it’s hard to remember he’s her enemy when she craves his touch more than her next breath. Her first loyalty is to her goddess, and she can’t afford to forget it.
Tacitus is enchanted by the fiery beauty who shows no fear and challenges him at every turn. Though enslaving her goes against his heart, it’s the only way he can protect her. As a fragile trust grows between them, he believes they can have a future together. But when he discovers the depth of her betrayal, his loyalties are torn between his heritage and a woman who could destroy everything he’s ever believed in.
Previously published as BETRAYED in 2013
Enslaved is the third book in The Druid Chronicles, but it wasn’t until Nimue appeared right near the end of Captive that I knew I had to write her story. All I knew about her was she worshipped the Moon Goddess, Arianrhod, and when she ran off on her mission I couldn’t wait to find out what happened. Although Enslaved, like all the books, is a standalone, it begins at the moment when Nimue left Morwyn in Captive. 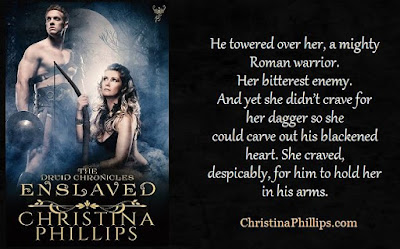 Bio
As a child, Christina always loved reading about far away places and magical worlds, but never imagined that one day she’d spend her days writing about them! Thankfully, when she grew up she decided her brave heroines deserved a gorgeous warrior to share their journey with, and hopes you enjoy the world of The Druid Chronicles as much as she enjoyed writing it ☺
Keep in touch with Christina
Website   |   Facebook   |   Twitter


If you’d like to receive notification of when my next book is released, sign up for my Newsletter