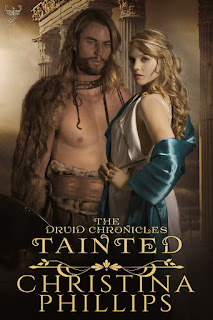 A dangerous love Rome will never allow…
Driven by the knowledge he failed to protect his king, Druid warrior Gawain abandons his gods and vows to destroy the Roman invaders by any means possible.
Nothing and no one is more important than protecting his fellow Druids from the enemy until he meets the beautiful Roman patrician, Antonia. She is everything he’s never wanted in a woman, yet she fascinates him like no other. Despite the danger of discovery he embarks on an illicit liaison with her, determined to uncover the reason for the infinite sorrow that haunts her eyes.
Newly arrived in Britannia from Rome, Antonia is inexplicably drawn to the cold, tough Celt. His touch stirs a passion she long thought died at the hands of her brutal former husband and his unexpected tenderness thaws her frozen heart. But she hides a deadly secret that could be her undoing, and knows her growing feelings for him can lead nowhere. Yet when a shadow from her past threatens her future Antonia is torn between the Empire of her birth and betraying Gawain, the man she’s grown to love.
Previously published in 2013
Tainted is the fourth book in The Druid Chronicles and this time I mixed it up a little. The hero is a tough Celtic warrior we first met in Forbidden, and although at the time I didn’t know if I’d write his book, readers were keen to find out what happened to him. And so was I! But it was hard to find the perfect heroine for him, until Antonia appeared.

A beautiful Roman noblewoman, she’s nothing like he first assumes and what starts out as a fleeting affair soon develops into something much deeper, and deadlier, for them both. 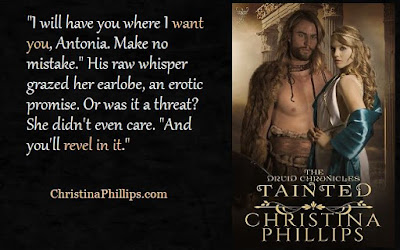 Bio
As a child, Christina always loved reading about far away places and magical worlds, but never imagined that one day she’d spend her days writing about them! Thankfully, when she grew up she decided her brave heroines deserved a gorgeous warrior to share their journey with, and hopes you enjoy the world of The Druid Chronicles as much as she enjoyed writing it J
Keep in touch with Christina
Website   |   Facebook   |   Twitter


If you’d like to receive notification of when my next book is released, sign up for my Newsletter

Where to start? Well, having read the previous in the series, Betrayed, I knew what to expect. A full immersion into the world of Roman Britain, a beautiful connection between two characters and a well-written, satisfying story. I got all this and more with Tainted.

The biggest appeal in the beginning is Gawain. The beautiful Cambrian warrior. I'm a sucker for warrior type men. Big, beautiful bodies, strong, commanding tendencies and a real belief in duty and heritage. But Gawain is written so beautifully that his alpha male ways are never dampened by his moments of kindness and compassion. I dare you not to fall in love with him. And unlike a lot of alpha males, he's very aware of himself and his feelings. It takes him a while, admittedly, but admirably he accepts his love for Antonia and his determination to forge a future in a world that will seemingly never accept them is enough to tug on your heart strings.

And Antonia. Lovely, Antonia. She appears fragile, ethereal, beautiful. I find I'm quite a fan of these slightly delicate heroines that only reveal their strength to us as the story progresses. It makes a change from feisty, fiery tongued heroines. As much as I love them, strength can come from within and I admire a writer who recognises that. And as a reader, you immediately feel sympathy for her as we learn of the things she has endured during her time in Rome with the husband who has now abandoned her after she cannot deliver any sons to term.

What starts out as an extremely erotic, yet thoroughly sensual and beautiful relationship between Gawain and Antonia, soon turns into what I could quite easily class as epic love. It's the kind of story where everyone is against them and you can't see how they could possibly be together yet you yearn for it so much your heart aches. They come together very quickly but the chemistry is so intense and Antonia's reasonings so logical that is doesn't seem rushed and it's easy to see why they fall for each other. Both are strong characters in their own way, balancing out one another and both are able to laugh and love generously.

And if I sound too gushing, I do think I found myself a little impatient in the first chapters. There was a bit of push and pull between Gawain and Antonia and I urgently wanted to rush through it to get to the good stuff. But once this book has you in it's hold, it will not release you and I'm pretty sure Gawain and Antonia will stay with me for a long time.