Em Petrova is giving away Ridge in ebook and Cowboy Crazy in audio! If you love cowboys, you're going to want to enter. 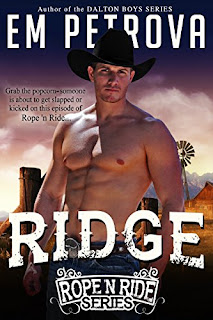 Grab the popcorn—someone is about to get slapped or kicked on this episode of Rope ’n Ride.

The season finale of the Calhouns’ rodeo reality show ends with Ridge being stood up by the woman he loves and humiliated on national TV. If that isn’t bad enough, an old knee injury has him wincing every time he gets on the back of a bronco, making it difficult to put winning scores up on the board. But he’s determined to shake off his streak of bad luck—and all these marriage proposals from fans pouring in now that the show has aired.

Kashley grew up with the Calhouns, playing hide and seek in the cornfields while their fathers talked ranching. And she’s been in love with Ridge…well, forever. He’s never noticed and she’s too shy to make any attempts, but when she sees him struggling after his breakup, coming to his aid is a no-brainer. Which lands her on a whirlwind tour of rodeos, where she’s falling more for him while struggling to rein in his self-destructive behavior.

The cameras love to catch Ridge losing his cool, his family is riding him to cut it out and he can’t keep his eyes—or every other body part off Kashley. Then a secret is revealed that has him going after her ex even as his own ex pops into his life again. Between the drama, his old injury and Wranglers that fit too tight after being around the woman he shouldn’t toy with, Ridge is fed up. Plus he couldn’t be in love again so soon, right?

Five brides for five brothers…at least that’s the deal the Daltons have struck with their boys. Each son must marry in order to inherit a piece of the ranch they love so much.

Hank Dalton yearns to run his own spread, but more than that, he longs for a woman to call his own. Paradise Valley is far from civilization, though, and that makes finding the perfect match difficult. Not many women like being two hours from a major supermarket or mall.

Charlotte Halton is on the run. Poor choices have left her with scars—in and out. After her powerful boyfriend left her drugged and set their apartment on fire, she’s just trying to put the pieces of her life back together. Abandoning all she knows seems like the best decision she’s ever made. At least until her car breaks down in the middle of cattle country.

When a pretty little woman is delivered into Hank’s hands, he believes it was fate that kept him from joining his brothers for a “wife hunt” in the city. But she’s leery of men and hiding something dark. Can Hank tap into the attraction they both feel before she drives away?

a Rafflecopter giveaway
at 14:01